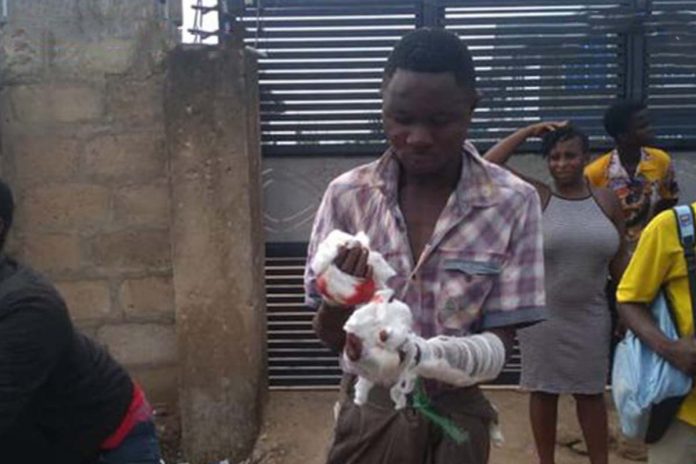 A bizarre incident has happened at Kasoa where a suspected mobile phone thief had been stripped off of his human fingers completely after undergoing excruciating pains.

The thief who is believed to be of a Nigerian origin, was captured by the joint youth group in the area who have taken it upon themselves to be monitoring things in the community. When the thief was seized by the guys in the town, many people thought he would have been lynched but he luckily found favour at the sight of those who arrested.

But in the process, they decided to teach him a bitter lesson by cutting off his fingers on his hands with a warning not to engage in such a theft case again but if he goes contrary, what he does not expect to be meted out to him, would be what he is going to receive.

His case is totally different from the other jurisdictions where suspected theft culprits are burnt alive or even in some horrifying instances, they are mobbed without having mercy upon them but in the case of that mobile phone thief, he was somehow fortunate to have been disfingered from the other part of his entire body.

Some human rights lawyers are already condemning the punishment inflicted on the body of the suspect thief without thinking thoroughly about the degree of consequences he unleashed on the owners of such assets.

It is precarious how thievery cases are on the rise in Ghana even though the police administration claimed and dispelled assertions that crime rates in the country have risen exponentially beyond control and now that, things are unfolding from all angels to buttress what the Ghanaian nationals have been registering their displeasure about in the country.