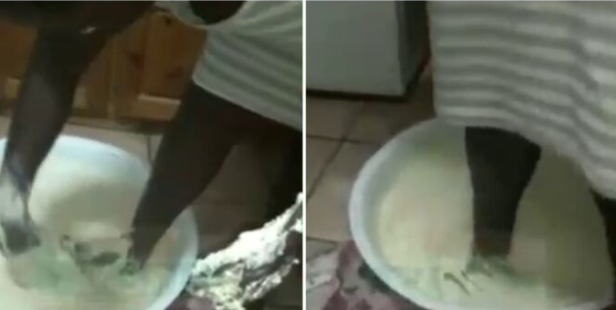 A video circulating on social media captured a  woman who sells ice Kenkey mashing balls of Kenkey in a pan with her dirty feet that has concerned concerns.

Social media has now become a tool in exposing some wicked act by some vendors who prepare food and sell it to the general public consumption.

Some vendors prepare their foods in an unhealthy way which is disturbing to health of the consumers.

In the video sighted by ghbuzznews.com, the unidentify woman was mashing and mixing the iced Kenkey with her dirty feet and her hands numerous times in a pan.

This viral video has generated a lot conversation on social media on how some of the vendors prepare foods in an unhealthy conditions.