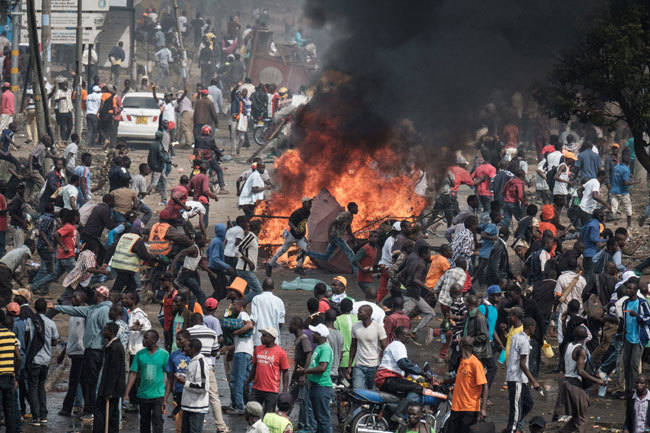 Kenya as an African country, has been in a state of confusion as the followers of the main opposition leader, Raila Odinga, put the country in chaos and total unrest after he was declared loser of the just ended general elections in the country.

Raila Odinga competed with the former vice president, William Ruto but he was defeated hands down as he still challenges the outcome of the national election results that were announced by the country’s election body.

Raila Odinga has been eyeing the seat for a very long time since time memorial but he is not being lucky to gather the needed figures to be acclaimed as the newly elected president of Kenya.

Therefore, his political supporters are on the tangent to causing insurrection and troubles here and there just to register their displeasure about the outcome of the election results that were proclaimed by the electoral commission which sought to go contrary to what they have been envisaging to happen in their lifetime but luck eluded them this time once again.

It is the responsibility of their leader to call them to order since he is still looking forward to being the president of Kenya despite his past failed attempted which he even attempted countlessly against the former president himself, Uhuru Kenya but he was gaply crushed head on seriously into the grinding machine where his nose oozed profusely with blood.

The election of Kenya is always such an amazing spectacular instance to behold because of the funny activities that always characterise their conducts whenever they are going into a national election after which every campaigning activities have been grinded to a total halt.

The experience coming from Kenya, is a typical similarity to all the African countries the moment one political party wins a presidential election or parliamentary while the other loses completely.

It is high time for the African countries to rise above such negative impacts of causing chaos and insurrection as the world is changing day in day out in making life more memorable and cheerful to their citizens despite the falling standard of economic booms.

It had been reported by our enviable media house where a Zimbabwean national in the person of Maxwell Chikumbutso invented wireless television sets and other valuable appliances that do not need the connectivity of electricity before they function but here we are in the same African country, so called supporters of someone who wanted to rule the country during which he contested for the national elections and lost shameful, gave an order to his followers to cause mayhems and commotions in the country just to make it ungovernable because he feels embarrassed by his failures for not winning the elections.

Such behaviours must not proceed from the mouth of some riffraff miscreants whose aim is to make wealth for themselves at the detriment of their citizens no matter the consequences.

As it stands now, the international media scenes being awashed with negative and unsightly spectacles all in the name of someone who glaringly lost an election but pretending to have been cheated and defrauded by the electoral body that supervises the conduct of the general elections in the country.

Foreign media houses are quick to broadcast everything that paints and discredits the African countries because they think nothing good comes from our mother land but Master Maxwell Chikumbutso of Zimbabwe silenced them on such an erroneous impression which is now deemed as a figment of their own imaginations but why is it that Kenya can not do same in restoring peace and tranquility to their citizens after a mere national election had been conducted which saw a clear winner?