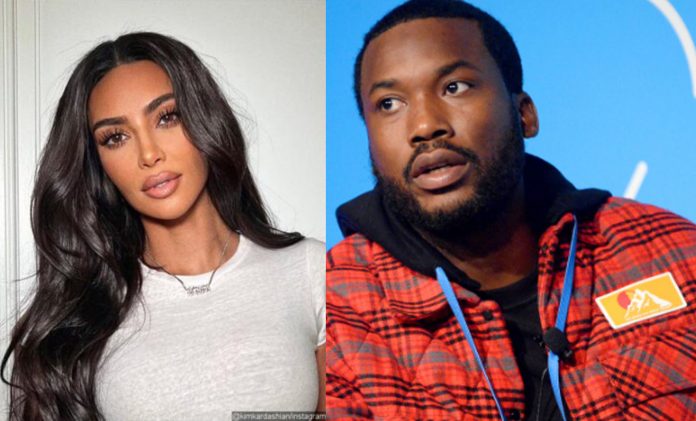 Life they said, is how you make it and if you continue to listen to every individual voice, you would remain stagnant in life.

Holy Bible of Christian believers says and educates that, good things come to those who wait patiently in life but the other coin of the divide is that, you could miss good things if you hesitate. Without being proactive in life, nothing else works for you at the end of the day when everyone begins to rejoice over what has been achieved before the day wraps up.

Now the rumour is rife and at everyone’s lips that since Kanye West has taken the bold decision to move on with his life after shamefully divorcing Kim Kardashian allegedly for sleeping with another man, Kim Kardashian too has waited for too long without having any intimacy with a man after the latter divorce debacles.

It has surfaced online that Kim Kardashian, after leaving her matrimonial home with Kanye West, she has found her lover who is also an American hip hop singer, Meek Mills. Though no actual confirmation has proceeded from the mouth of Meek Mills if indeed he is having an affair with Kim Kardashian as they have been rumoured to be dating but socialists have simply put it that, the evidence is clear enough that they are both into something romantic. It appears Meek Mills seems not to be leaving the social media platforms anytime soon since he likes enjoying controversies.

The same Meek Mills came to Ghana recently and managed to use the highest and most authoritative office of the land with first class security installations, the Flagstaff House, the seat of Ghana’s Presidency, as a music videos shooting centre. Such activities of pomposity and notoriety coupled with gross insubordination towards the people of Ghana, has not died down the waters and yet still, he is in the news again for the wrong deeds while seeking media hypes and acclamations.