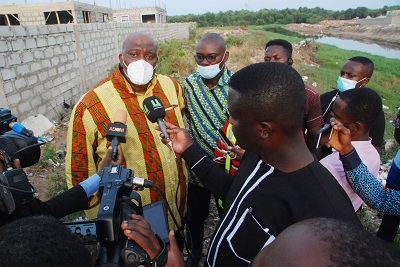 The government of Ghana has name some lands believing to be reserved purposely for Ramsar site but been encroached by some scrupulous individuals claiming to be custodial owners of the said land which was acquired and reserved purposely wetlands and not for human settlement.

An intelligent information reaching the portal is that the Greater Accra regional minister and some politicians are planning to rather demolished some parts of Klagon for their personal gains.

According to the investigation it was established that the said land in Klagon is a rich land and eyes it way back.

Speaking with some landlords in the area it was revealed that the Greater Accra Regional Minister and Nii Laryea Afotey Agbo and some politicians are behind the said demolishing exercises yet to take place.

They indicated that even doe some parts of Klagon falls under spintex and Sakumono which all of them doesn’t fall under any of the Ramsar sites which was announced by the government recently.

The reason why the residents bare teeth over the ordeal is that they have been for years nobody or any government has said that the Klagon land is a Ramsar site and need to be demolished with immediate effect.

Plot by both Hon.Henry Quartey, Nii Laryea Afotey Agbo and some politicians has been exposed so call on the President of the Republic of Ghana H.E.Nana Addo Dankwa to come to their aid and investigate the matter to bring lasting solution.

Some people for their selfish gains try to destroy the ruling governing party’s name all in the name of their position.

The residents call on the current executive of the ruling NPP party and leaders to intervene into the matter because if care is not taken it will affect the party in future elections.

No wonder that the residents chased out the director of operations at the presidency Mr Lord Commey and his gangs nearly mob up due to a piece of land at the Zabarima line which was own by a businessman.

They also call on the security agency and the BNI to act fast into the matter before it gets out of hand.