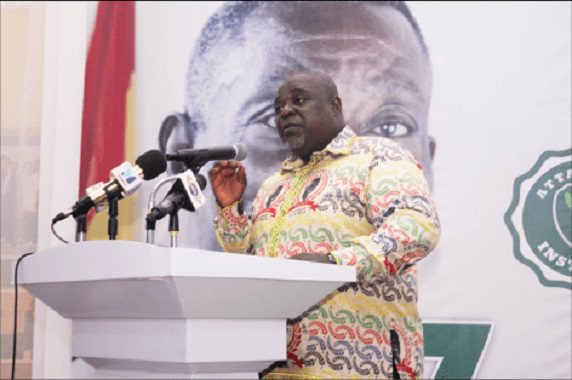 The member of Parliament on the ticket of the main opposition political party, NDC, for the Odododiodo constituency in the Greater Accra Region, Edwin Nii Lante Vandepuije, has given a daring warning to Korku Anyidoho, the man at the centre of the Asomdwe Park brouhaha that, if he tries to prevent him from attending the commemoration of the 10th years anniversary of the late president John Evans Atta Mills, then, people will see his dead body lying down either in a prostrate or supine position.

The threat culminating from the anger and vexation of the member of Parliament, has been necessitated by the information going round that the Chief Executive Officer of the Atta Mills foundation, who is also the main man at the centre of activities concerning the anniversary programmes, Korku Anyidoho, extended invitations to the opposition National Democratic Congress, NDC, inviting the hierarchy for the tenth year anniversary of the departed Professor John Evans Atta Mills, but it was reported that the leadership of the party turned the invitation down without giving further and better reasons as to why they would not be present on the event ground to see how the activities lined up for the smooth anniversary celebration of their late president would pan out.

It is on this very basis that, Korku Anyidoho is at loggerheads with the party officials for rejecting his call on them to come over and grace the occasion even though there were replete accounts hidden from the views of the general public as to why they would not honour the invitation from the office of Korku Anyidoho and some of his embattled and disgruntled officers who broke ranks with the main opposition political party, the National Democratic Congress after it lost the 2020 general elections to the current president, Nana Addo Dankwa Akufo Addo.

Since then, there has been back and forth of some kind of internal wranglings between the NDC and Korku Anyidoho after he challenged John Asiedu Nketsia of the general secretary position slot which he conspicuously lost with shame and embarrassment without words for describing his sudden downfall.

The late former president John Evans Atta Mills, gave the opportunity to all the young and vibrant political commentators with the youthful exuberant by extending his executive hands to all of them to come and serve in his first term administration even though some people kicked against his decision attributing it to the impression that, they were to young and naive to be on the political ladder at that time but he did not yield to such erroneous impressions because he foresaw what such individuals carried under their sleeves without many people getting to their level of acumen before he unexpectedly passed away with many doubting if indeed he died of natural causes.

Therefore, it was the same late professor of law that granted the chance to all the young and enterprising political giants of today before they are known by the world and if not, nobody would have heard of them except some few Ghanaian individuals who pay critical attentions to the political matters in the country.

After giving them the opportunity to serve in his first political administration, Korku Anyidoho, was the then, director of communications at the presidency who became the government of the late John Evans Atta Mills’ public relations officer, churning out superfluous and baseless information to the general public claiming such details were coming from the late president because, he realised the president was somehow indisposed and thus, becoming incapacitated and for that sake, he authoritatively, dissimulated informations that could not have come into the public domain but due to pomposity and arrogance as claimed by some of his own colleagues at the time where John Dramani Mahama was the vice president.

It had been remoured that because of his blatant disregard and recourse to the office of then vice president John Dramani Mahama, both were not in talking terms due to the alacrity and capricious manner in which Korku Anyidoho was going about his official duties at the presidency. Such were the few happenings which transpired those days and yet still, they are prevailing amongst them behind the scenes based on that, someone would think he is better than the other even though they were all called at the same time by the late former president John Evans Atta Mills into the political limelights to justify their inclusions in his administration though they described their calling into an office as premature and uncalled for but, they proved that yes indeed, they could do something significant if they would be given the nod to display their level of dexterity and competence to help govern the country according to the standing orders and rule of law backed by the constitution of the republic of Ghana.

But the manner in which, Edwin Nii Lante Vandepuije issued his threats to Korku Anyidoho, it appears as though, he has a personal bone to pick up with him because, his threats even in other breathe, amounted to causing harm and injury and by an extension, a threat to his personal life and security, according to the criminal laws of Ghana, which could also land him in jail after facing prosecution on threatening the life of Korku Anyidoho and causing him harm and other charges that are likely to be pronounced as criminal conducts and offences liable for sentencing on charges of second degree felony which is a serious criminal offence and he could face criminal prosecution for life in prison but, we are living in Ghana and thus, we all know that the law of Ghana, only bites the fingers of the poor and not the rich even though, legal luminaries in the country may say, the wheels of justice, grinds slowly.

It is also evidenced that, dispatched and detailed security forces are on the ground to seek to it that the personal lives and security of those coming are protected before, during and after the whole anniversary and as such, others are believing that the threats coming from the mouth of Nii Lante Vandepuije, would just be “mean and mere” without any tooth to bite.