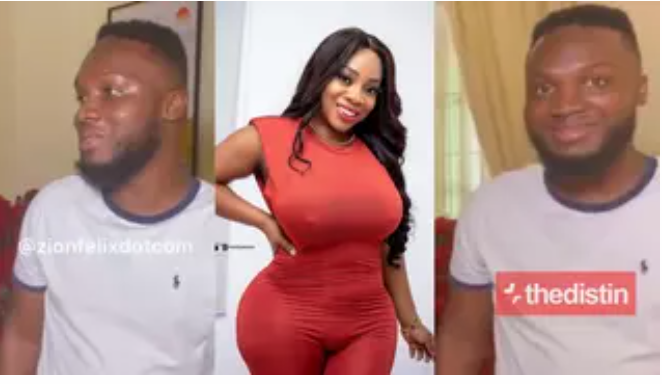 This said audio is from a conversation Moesha’s brother, Nelson had with actress and entrepreneur, Salma Mumin.

According to one undercover Instagram blogger, Aba The Great , Salma Mumin recorded Moesha’s brother during their conversation and intentionally leaked it.

Nelson, Moesha’s brother, revealed that his sister had two lovers, a Nigerian senator and a Ghanaian pastor, and that she had promised each of them that they were the only ones she was dating.

Nelson added that one day, Moesha’s rich Nigerian boyfriend invited her over to his house but she refused and had to make up a tale about missing her trip to appease him.

According to Nelson, as his sister was on a WhatsApp call with the man, she saw him practicing occult with blood all over his body, which terrified her and made her shout in shock.

The man warned Moesha not to tell anyone what she saw on him when she called him, or else something awful would happen to her, according to Nelson’s allegations.

Moesha refused to adhere to her occultic boyfriend’s warning as she started to tell anyone close to her what she saw and that commenced her turning a new leaf because she feared to die.
Nelson added that his sister started giving out her money, gave bundles to her close friends, and other properties she owned.

Prior to Moesha selling and giving out her properties, she visited her pastor, who asked her to sell all the things she had acquired from the man.

Nelson went on to say that Moesha had done a slew of evil things, including insulting wives of married men who called and warned her to stay away from their husbands, paying blogs to smear people’s reputations, and paying award organizers to hack them on her behalf, just to mention few.