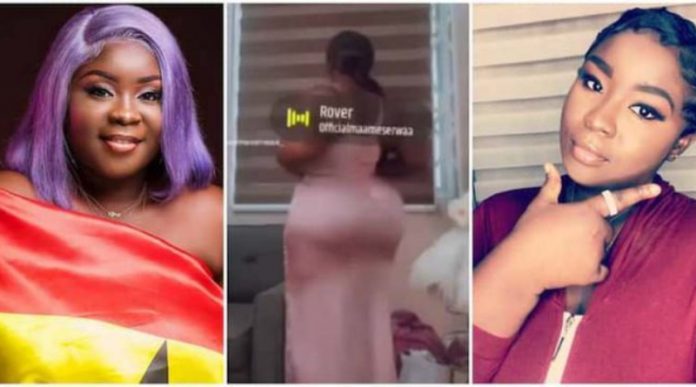 Maame Serwaa, an actress in Kumawood, has at last provided an explanation for the abrupt appearance of her “gargantuan” behind.

After pictures of her ‘gargantuan’ behind went viral months ago, Maame Serwaa shocked admirers and got them talking.

The actress, whose real name is Clara Amoateng Benson, is well recognized for having large breasts, which she attributes to her maternal ancestry.

However, several people assumed she had augmented her figure due to her enormous posterior.

Maame Serwaa, who has debunked the allegations in an interview, has put it down to growing.

She said that people shouldn’t pay attention to the fact that girls change a lot as they mature.

“We are growing, the Maame Serwaa, you know, when she was 16 years old, can’t remain the same forever. In some women, their features appear enhanced. You shouldn’t assume that one has gone under the knife. Some will even say that you are overeating.

“When I was younger, I had smaller boobs, but as time goes on, I see them developing. I don’t have a child but it has grown bigger, you get it? It is life, you will have changes,” she clarified in an interview with Daily View Gh.

Maame Serwaa further revealed she has been using the gym often to manage her stature.