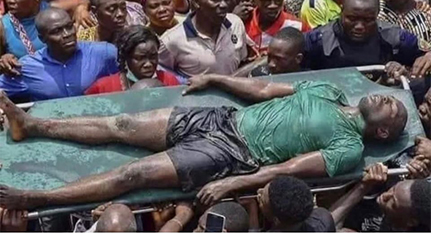 In a bizarre incident involving a husband and a wife of many years where the husband has been solely footing the house in which they are living together with their biological children without any fracas until this week that a revealing and heartbreaking exposé has been uncovered concerning the secret deals, the wife of the human has been dealing with some suspicious characters in the area where they are residing.

The anus of the woman whose husband has collapsed suddenly after hearing and subsequently discovering the substantial matter involving the woman and other accomplices just to be siphoning and squeezing the man from his daily sweat after a hard day’s work.

It has been revealed without any shred of doubt that, the house that the husband has been paying rent for, for the past fifteen years staying in together with the wife and their biological children, belongs to his wife without telling the husband that it is her property but the man has been blindly paying the rent bills to someone who he calls his landlord or landlady in the house whenever the rent is due for a renewable.

After discovering the fact for himself, he could not behold his eyes any longer and in the process, he unexpectedly falls into a coma.

He is currently recuperating in one of the anonymous health facilities in the community to regain some consciousness before he knows what he does next.

What the wife that he married did clandestinely was to conspire with other people secretly that they are the owners of the house where the man will pay the rent bills into the hands of those he calls landlords and landladies and shockingly with hidden motives, his wife will wickedly pass through the dark side of his sight and go for the sweat of his bitter heart and collect the money and thus, give a percentage to the person she contracts to embark on her filthy activities for her.

But finally, when the man discovers the whole truth and nothing but the truth, he tragically lost his breath within a twinkle of an eye causing fear and panic amongst neighbors who witnessed his sudden fall.

You could clearly understand that what the wife of the husband does, does not help or promote the progress and stability of the family relationship they must have after getting married to each other.

The woman has been squeezing the finances of the husband without telling the man that she has property in a form of an apartment or a house where we are going to put up after we finally marry each other but the said woman, keeps this very resounding truth to her heartless chest whilst the husband continues to sacrifice more than expected just to pay their house rent which will, in turn, go back into the pockets of his lovely wife without his knowledge.

Due to the evil conducts and intentions of the woman toward the husband, many men of this contemporary world will just conclude that it is as a result of such characters and attitudes that they do not rely on or trust women of this earth though they are all not the same.

It would be so fascinating to identify the church or mosque in which she fellowships before embarking on this ruthless agenda against his husband of many years but no matter what the case may be, she has been exposed beyond description and that should put issues to rest.