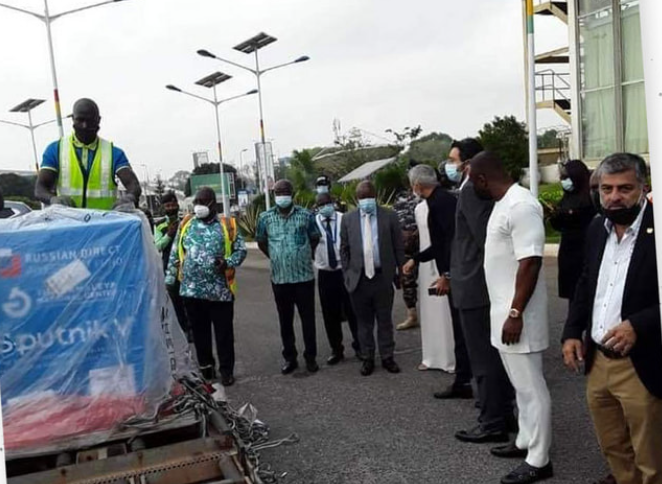 The Ministry of Health says it will respond to allegations that it bought the Sputnik V COVID-19 vaccine produced in Russia for $19 per dose instead of $10.
A report by a Norwegian tabloid newspaper published on June 3, 2021, alleges that the government signed the contract for the purchase of the vaccine with an Emirati official involved in the controversial Ameri power deal and a Norwegian citizen charged with money laundering in Norway.

According to the report published on www.vg.no, government signed the purchase contract for 3.4 million doses of the vaccine after it received an initial 16,000 doses from the two aforementioned names on March 3, 2021.

“It is 3 March and the moment of truth for Minister of Health, Kwaku Agyeman-Manu (65). A flight from the Emirates is taxiing to the terminal in Accra, capital of Ghana, where the Minister of Health is waiting. Out step two men: One is a Sheikh and second cousin of the ruler of Dubai. The other has been on the run from Norwegian police for years.

“Boxes containing a total of 16,000 doses of the Russian Sputnik V are unloaded from the plane and placed in front of the Minister of Health. Six days later, the Ministry of Health in Ghana signs an agreement with the Sheik. They announce that they have reached an agreement regarding the purchase of 3.4 million vaccine doses. No price is publicly disclosed,” the report said.

It added that although the contract was for 3.4 million sold doses of the vaccine, the Ministry of Finance had only paid for 300,000 doses.

According to the publication, when the Ministry of Health was contacted to respond to the story, “a group of bureaucrats” told the newspaper that their job was to pay at the end of the day after the contract had been signed.

The Ministry of Finance in response to the story said the vaccines were purchased to “protect” people.

The Minister of Finance, Mr Ken Ofori-Atta, when asked why he purchased the vaccine for $19 per dose, was quoted as saying: “I don’t know. You know, you are confronted with “the good guys” from the West not giving you any assurances of supply [of vaccines], and you have 30 million people and are to save lives. You know, it’s easy to sit somewhere else and say: Why are you doing this? But you need to make sure you protect your people. You manage that as well as you can. This is a all a contrived and manufactured crisis, because clearly there’s enough [vaccines] to go around if only there was equity and justice in what we are doing.”

Meanwhile, the Ministry of Health in a press release dated Wednesday, June 9, says it will respond to the contents of the publication by close of day.

“The Ministry of Health wishes to inform the public that it will issue a release today in response to the allegations published in the said news story about its processes of procuring the Sputnik V vaccines for the nation.

“It is therefore asking the public to exercise patience. The Ministry will come out with facts about the process,” the statement said.