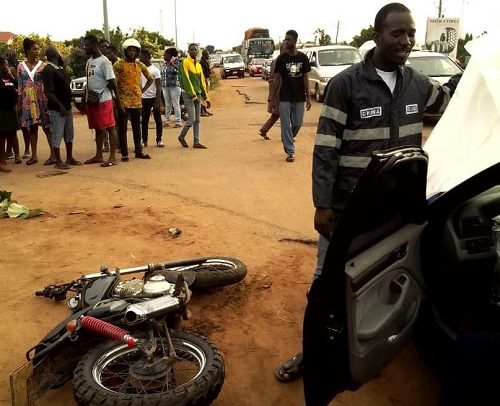 A 21-year-old motorcycle rider has lost his life in a fatal accident at Mataheko on the Tema-Akosombo highway.

Emmanuel Tetteh reportedly ran his motorbike into a tipper truck which was crossing the highway around AP Fuel Station.

Suspect driver Danteh Joshua, 36 years has been arrested by police to assist in investigations.

He has been charged with careless and inconsiderate driving and negligently causing harm to be arraigned before court.

Chief Inspector Stella Dede Dzakpasu, Public Relations Officer (PRO) of the Tema Regional Police Command told DGN Online that on Sunday June 27, 2021 at about 3:15pm, suspect driver in charge of Howo tipper truck with registration number GN 8286-17 driving from a washing bay near Emefs Police Station towards the AP Filling Station-Mataheko on the opposite side of the road along the Tema-Akosombo highway.

Vehicles from both directions had stopped for the tipper truck driver to proceed when a motorbike from nowhere suddenly ran into the middle portion of the car and the rider of the said motorbike was seriously injured as a result.

His body has since been deposited at same hospital mortuary for preservation and autopsy.

The case, according to the PRO was under investigation.

Tema Regional Police Command has therefore admonished motorcycle riders and drivers that they should also be observant and vigilant.