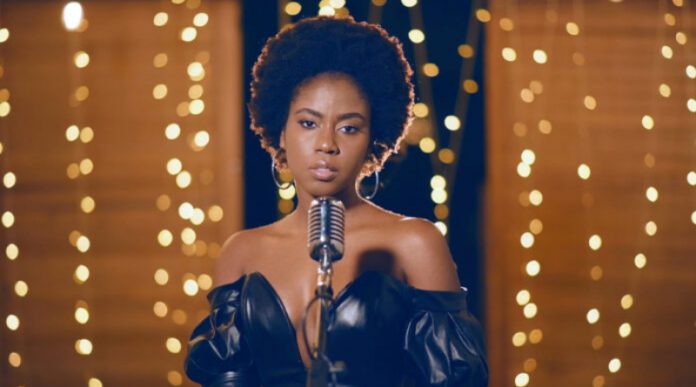 Mzvee has revealed that her previous boyfriend is the cause of the challenges she is facing in her attempt to have a peaceful relationship with her fiance.

According to the music sensation, her ex-boyfriend has damaged the relationship is currently having with her partner out of jealousy and a spirit of envy which is still burning his heart that he is not the man removing her panties to see what has been hidden in her undies.

She disclosed that her past boyfriend has been a loggerhead with her because of her popularity due to how influential she is in Ghana and other parts of the world where she is highly recognized by people from all walks of life despite her tribal backgrounds. Miss Vera Hamenu Kpeda, known in the showbiz circles as Mzvee, stated that, during one of her recent interviews, she underscored how different kinds of people have been asking her out because of how gifted and talented she is as a result of the excellent manner in which she displays her skills on stage anytime the time avails itself during which she proves to the whole world what she has been made of even though she was created as a woman.

The music idol indicated that she is having a beautiful relationship where she is preparing to tie the knot with the real lover of her life but due to the wicked and envious character of her past jilted partner, he has been a thorn in her flesh tormenting and piecing together through to her nervous system causing her nightmare and psychologically traumatic experiences just because the ex-boyfriend does not want to see the progress of her new romantic relationship she is engaged in deeply with her current sex partner where both of them enjoy the flesh of each other enthusiastically.

According to what Vera Hamenu Kpeda known as Mzvee in the entertainment industry, her ex-boyfriend feels distraught and thus, he goes out there spreading rumours about her personal life secrets which in reality has nothing to do with her current relationship which he knows very well that everything is moving on well with her in this fresh relationship but he still intends splashing unfounded remarks about things that did not even take place during or after their relationship just to ruin the beauty of her life just because he is no longer removing her panties which he missed due to his own unnecessary rise of Skywalker attitudes and conducts she admonished him on several occasions yet still he proved adamant to returning to new leaf and based on that his destructive behaviours, they had to part ways with each other for lasting peace and tranquility to prevail in the lives of both because they are too young to be going to such hellish and needless altercations between the two of them about matters pertaining to home affairs and other stuffs.

Mzvee admitted that her past boyfriend has been an intrusion into her relationship just because he knows how she does her things to suit her satisfactorily because of the kind of an individual that she is even though she is a typical type of musical goddess, she does not relate to those in the circles of music or entertainment only but for the global world due to her versatile nature of dealing with affairs relating to her business development and trading issues that are bothering on her personality and venture because she, she is such an adventurous lady who does not wait for a man to give her everything that she needs before she calls herself a woman due to how she was trained and cultured because she has not been taught for Ghana only but the entire world.

She finally delivered a bold and brave remark that, whatever her ex-boyfriend does against her romantic affairs that she is having with her new sex partner, it will not surface and derail her fresh relationship though he attempted countlessly to ruin her relationship he has completely failed because she is not going to allow him to do that filthy stuff again.