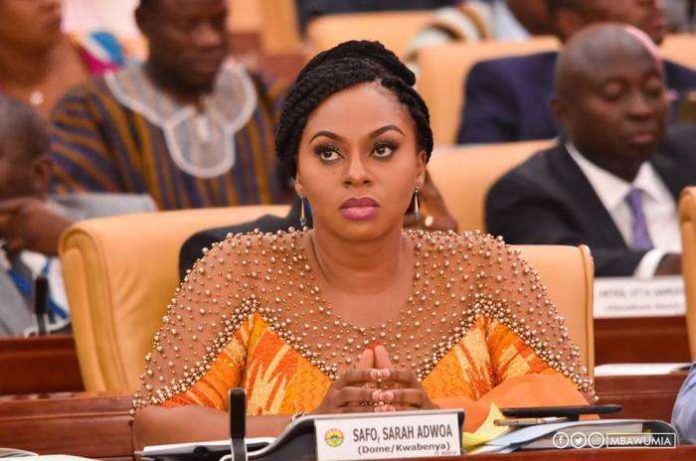 The president of the republic of Ghana, His Excellency Nana Addo Dankwa Akufo Addo, has executive power and authority, sacked the minister for Gender and Social Protection, Hon. Sarah Adwoa Safo definitely without any further delay.

The dismissed minister of state doubles as the member of Parliament for Dome Kwabenya on the ticket of the political party under which the current president is governing the country of Ghana at the moment.

The total absence of the honorable member of Parliament and also minister of state, has crippled a lot of programs and activities planned to be embarked upon by the ministry headed by the fired minister and according to some eyewitnesses to the events unfolding at the ministry, it is high time that the president threw her out of government to pave way for someone else who would even be more competent than she to manage the affairs of the ministry to project and provide the needs and demands of the vulnerable in society.

The truant actions were taken by the member of Parliament for Dome, Hon. Adwoa Safo, affected largely, her contributions to matters of national importance on the floor of Parliament during quorum and debates at various stages of proceedings in the house of Parliament.

Her dismissal had been rumored about three weeks ago but it was outrightly denied by government officials because, at that time, the information communicated to the general public by some disgruntled and aggrieved members of the New Patriotic Party because of what they heard had been offered to the honorable minister of Gender and Social Protection to return to the country and assist the government in passing some very important bills, went out briskly to the public and claimed that, she was gifted with a huge colossal amount of money and a private resident bought by the resources of the state.

Now, it is clear to everyone that she is no longer a cabinet minister under the leadership of President Nana Addo Dankwa Akufo Addo.

It is believed that an official communication would be disseminated to her officially before such a draconian and harsh decision would have been taken against her as a minister of state in the regime of the current president and his appointees.

Currently, the dust has been settled on the rumor that sprung up some time ago that, she would be part of certain ministers of state to be reshuffled as an attempt to sack her indirectly.

Even though she is out of the jurisdiction at the moment, she is very much aware of everything that transpires in the country and matters relating to her parliamentary duties and ministerial portfolios.

Ghanaian people have been registering their displeasure about the poor and porous leadership of the government calling for a possible reshuffling of ministers so that more fresh blood could be brought on board and it seems, this very austere action taken against the gender and social protection minister, is just a tip of the iceberg to just cool down tempers.