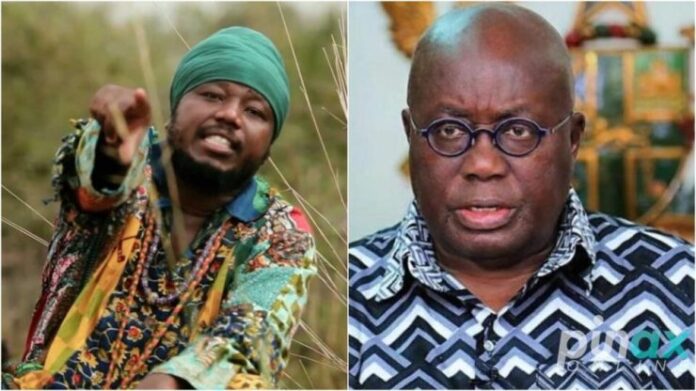 The popular broadcaster and a renowned reggae artiste, has descended on the incumbent president of the republic of Ghana, His Excellency Nana Addo Dankwa Akufo Addo, describing him and his structure of governance as the worst ever in the history of Ghana while stating emphatically that, he is surprised that, Nana Addo who is arrogating himself as the president of the republic of Ghana, is not even ashamed of his bad and egregious records and yet still touting himself to be the best thing to have ever happened to Ghanaian people after coming into office under strange and bizarre circumstances surrounding the credibility and genuineness of his victory in the general elections before assuming office as the president of Ghana.

According to the celebrated Ghanaian media personality, he will stand anywhere in this country with prima facie evidences contained in his reasons for describing the president’s leadership style as the deadliest and most terrible to have ever happened to Ghanaian people and the country as a whole and defend him views because, it is high time that the people of Ghana rose up against his repressive and obfuscatious regime emanating from what we are seeing and hearing across the entire length and breadth of Ghana where no good news comes into our ears but bad and draconian instances of corruption related cases that he is heavily seated on as a timing bomb because he is also a beneficiary from what those that he has put into power.

The sad drowning defamatory remarks that have proceeded from the mouth of the Ghanaian senior broadcaster, have become necessary due to the emerging challenges facing the country where deep rooted acts of theft and thievery are being the water and food substances being consumed and drunk by those entrusted with State financial resources, are pilfering largely from the vaults of the nation without being arrested and charged for causing financial losses to the country but rather, this visionless and clueless government headed by Nana Addo Dankwa Akufo Addo calling himself as the best president to have governed Ghana since independence from British Colonial authorities over sixty years ago.