Evangelist Patricia Oduro, alias Nana Agradaa, has finally spoken out about her detention in April of last year.

Nana Agradaa, the former fetish priestess revealed what led to her imprisonment in an interview with Abeiku Santana on Okay FM. 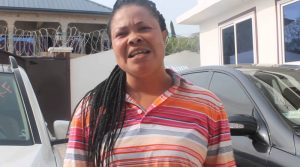 Mama Pat, an evangelist, rejected claims that she was detained for engaging in any fraudulent enterprise.

According to the self-proclaimed woman of God, she was the only one detained and arraigned in court out of the 49 defaulters.

She went on to say that she had a change of heart and decided to repent while in police custody.

In April 2021, Nana Agradaa was arrested by the Police and National Security Intelligence Operative, in collaboration with the National Communications Authourity.

Her two TV stations, Thunder TV and Ice1 TV were closed down after several complains were lodged about her fraudulent activity and operating without a license.

She was later granted a 500,000 cedis and self-recognizance bail after she was arraigned before the court.