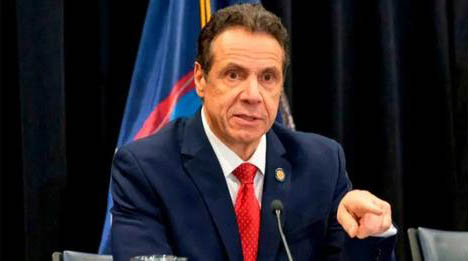 The Democratic governor has come under pressure as a growing number of women – currently 11 – have accused him of unwelcome physical contact or statements. A chorus of state and national leaders had called for his resignation, which he had resisted until Tuesday.

Cuomo argued that any offence he caused was unintentional and disputed whether the allegations against him would hold up in court. But he also pointed out that, if he caused offence, that was his responsibility.

“I do hug and kiss people casually, women and men. I have done it all my life. It’s who I’ve been since I can remember. In my mind I’ve never crossed the line,” he said as he announced his resignation. “I did not understand the extent to which the line has been redrawn.”

To him, the main reason to leave office now is that the charges are turning into a distraction, at a time when he said New York needs to be worried about a surge in the Delta variant of the coronavirus and other pressing issues.

His resignation will take effect within 14 days, during which he said he would work to arrange a smooth handover to Lieutenant Governor Kathy Hochul.

He also used the press conference to thank New Yorkers “for the honour of serving you” and laid out a long list of accomplishments since he took office in 2011, including efforts on gun control and a law to allow marriage equality.

READ ALSO: Biden, Trump and the DisUnited States of America (2)
He also signalled that he would not let any charges be laid against him without a fight. He said there were questions of bias in the charges against him.

“The most serious allegations made against me have no credible factual basis in the report,” he said. “And there is a difference between alleged improper conduct and concluding sexual harassment.”

He was referring to a recent report by the state’s attorney general, Letitia James, which reached the conclusion that he had sexually harassed multiple women.

But Cuomo also touched on other reasons for his resignation, talking about the effect the coverage of the scandal had had on his relations with his adult daughters.

“I never did and never would intentionally disrespect a woman or treat a person differently,” he said, speaking to his daughters at the conference. “Your Dad made mistakes and he apologizes and learns from it.”

He then noted that, “it is still, in many ways, a man’s world.

The report accused Cuomo of making unwanted advances to women, including touching, kissing, hugging and making unsolicited comments. Some accused him of creating a hostile work atmosphere.

Without accepting guilt, Cuomo tried to argue he was a victim of changing times.

“This is not to say that there aren’t 11 women whom I truly offended. I thought a hug and putting an arm around a staff person while taking a picture was friendly.

“I have slipped and called people ‘honey,’ ‘sweetheart’ and ‘darling,’ he added, recounting an incident in which he told a doctor giving him a coronavirus vaccination that she made “that gown look good,” a comment which he said also drew complaint.

“I take full responsibility for my actions. I have been too familiar with people.

It is a shocking reversal for Cuomo, who, during the height of the coronavirus pandemic, was often seen as a national leader, offering nearly daily updates on how to deal with the pandemic while many health experts argued that then-president Donald Trump was doing little to spread information or urge people to act responsibly.