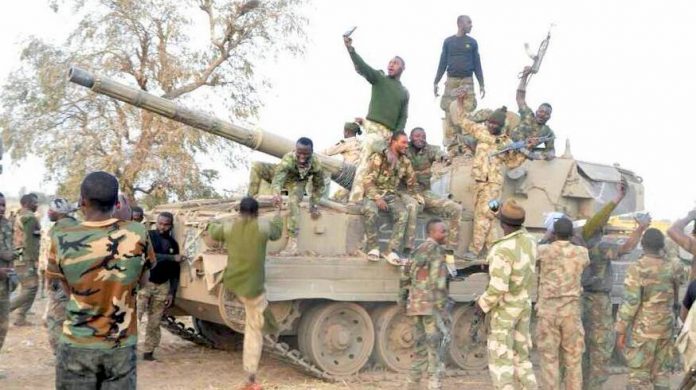 The Nigerian Army officers on Thursday, finally bade farewell to one of their senior slain heroes who fell asleep on the mouth bullet from Boko Haram members when they faced the military forces in shooting encounter trying to control the territories that were in the jurisdiction of the assigned military detachments but unfortunately for Captain Attah Samuel and four of his other colleagues, they could not survive when the bullets proceeding from the quiver of the guns used in combating the military men and women in Nigeria, fell through the bellies of those military senior ranking members after which they fell suddenly on the ground and breathed out their last as a paid price for their loyalty and patriotism towards the cause of the Nigerian government and the nation at large but the question should be, is Nigeria a country worth dying for, if yes, then, the government must initiate transformational ways through which the children of the such individuals who fell through the mouths of the bullets could be protected and supported financially from the cost of the government coffers.

Boko Haram members in Nigeria have become a thorn in the flesh of the Nigerian and the citizens because of how quick and fast their evil and harmful activities are briskly rising exponentially causing fear and insecurity amongst the citizens of Nigeria and other foreign nationals who are residing in that country which the Buhari regime has promised and assured the people of Nigeria that he would deal with them decisively since he is a military officer before he later ventured into politics.