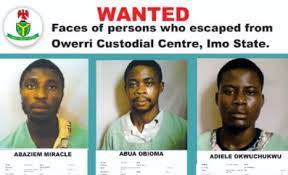 Scores of Nigerian hooligans, who have made it their daily routine activities by terrorizing citizens of the country, have fled from prison custody after their subsequent arrest and detention.

The Ghana Immigration Service, ha,s therefore, published the identities of some of them using educate the general public against their hardened activities in the country.

The prison escapee has been linked with the activities relating to that terrorist group operating in Nigeria where many civilians have died as a result of malevolent attacks launched on those.

Boko Haram has been on the mind of people killing others because of their activities of terrorism in various parts of thWestst African subregions where killing innocent people has become like the water they are drinking on daily basis for survival.

The names of such individuals who broke jail have been published by the Ghana Immigration Service after they discovered that such endangered species whose behaviors could not be countenanced any longer in the country after their capture and detention have absconded from prison custody causing their eyes to turn red as they began to chase them from where ever their hideouts may probably be.

They are pursuing their current to cause their arrest after they managed to escape incomprehensibly without any sign of collusion bet them they and the authorities at the prison yard whose duties are to check and mount surveillance on the safety and proper upkeep of the sentenced individuals when they were arrested and sentenced whilst awaiting further prosecution of their various cases.

As the Ghana Immigration Service has launched a manhunt for such dangerous criminals, the public is also urged to volunteer information that could lead to the location and arrest of those individual members become cause their activities and living in the same environment as other vulnerable people ramble, will not augur well for the safety and peace of those innocent Ghanaians living in the country and thus, something drastic must be done briskly to mount surveillance on them so that they are brought back to serve their various prison sentences to serve as a deterrent to heartless individuals who are engaging in the same acts of violence.

Some Nigerians living in the country are always feared by groups of people due to their dangerous actives everywhere they find themselves which is painting the name of the country from which they frail the bad light though the government itself is trying hard to wipe such a dent ImageMagick to winning investor confidence in the country to boost up business development and trading currencies for the progress of the country where such deadly mayhems nationals are hailing from with their reckless lifestyle and attitudes which is causing many people to be apprehensive of their conducts.

Mainly, such individual bandits, mostly hide in certain areas of the country in which they assume that practically, it would be tough for the police officers to reach out to them because of their remote, nature, and as a result, the wiladvantageantages of that difficulty in fomenting troubneighboringbouring countries and towns where likely not be captured due to the poor nature of ing easy access to those hinter places for their capture.