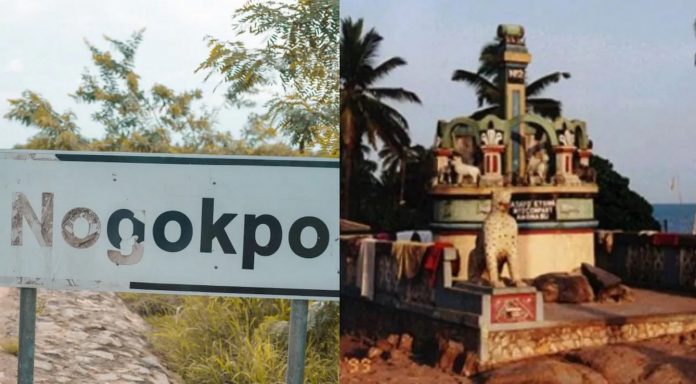 The head of the Shrine at Nogokpo has educated the public on how they operate and modus operandi instituted to help adjudicate matters brought before their shrine for perusal and consulting views on pending cases.

According to him; numerous cases are being brought to the fore of the traditional shrine court to resolve on various reasons that those who may trust them based on how fair and transparent they deal with matters submitted before them for a redress.

According to one Mr. Amuzu, who is the head of the shrine god called “Zakadza”, different kinds of matters are brought before them to adjudicate as in cases of land litigation, encroachment, fraudulent related activities perpetrated against such individuals, money being stolen or someone defrauded you by false presences.

He cleared doubts on how they operate in their shrine saying; the Nogokpo shrine has nine member panel who sit on cases every Saturday thoroughly before final determinations. He said, they do their own background checks and verifications to find out for themselves if you are culpable of the case leveled against you or other words.

He clarified that, before their conclude on their final determinations or other words of the related cases pending before their court which consists of nine member panel, numerous questions are going to be asked you concerning what has been thrown against you or to seek for personal views on the matter but if you have knowledge of what has been said against you, what they do is that, they leave the rest of the other outstanding matters into the hands of the gods to decide and based on their own understanding of the real core fact in the spiritual realms as they have seen it then the final judgement or verdict would be pronounced in due case and the actual person who committed the act but denying or denied, would be known by all.

Nogokpo is a very popular community in the Ketu South Municipality of the Volta Region and in this notable township, there is a god of thunder at the shrine of Nogokpo that strikes and smites people who have undertaken or engaged themselves in criminal activities after they are called to speak for their side of the case and if they know that they actually did or committed what they were asked to tell the whole truth and nothing else but the truth, but they intentionally think they are deceiving the court panel members, then their names would be handed over to the thunder gods for their final verdict and thereafter, the thunder strikes or smites such individuals because the gods of the shrine do not kill without a cause and it would by all means be something evil that you did and you are interrogated countless times which you have denied and refuted any involvement in the case before the gods of the shrine will act accordingly to clear every ambiguity.