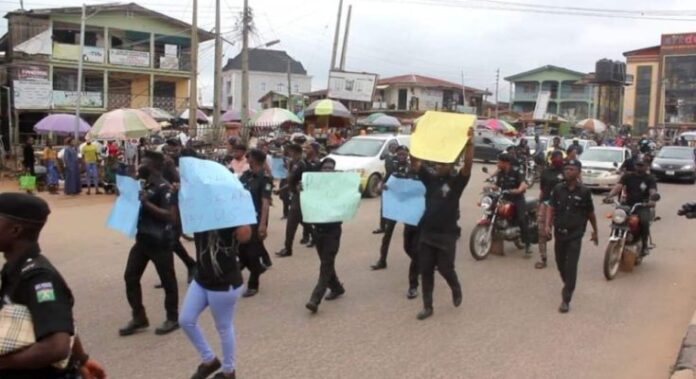 It has been reported that some motor bike riders have taken the advantage where a harrowing incident involving the security officers whose wives have been molested and sexually assaulted due to the inability of their husbands to satisfy their pressing needs at home.

The report confirms and paints a mentally disturbing phenomena where, the public police officers who are maintaining law and order in the country, have not been paid for the past eighteen months which is causing chaos and pandemonium in their various families as wives seek irresponsible activities to engage themselves in so that they could afford their needs by sleeping with other people including motorcycle riders.

The police officers at Osogbo, Ogun state of Nigeria, have bemoaned emotional instances of government’s lukewarm and lackadaisical attitudes towards their end of monthly payments despite they registering their displeasure against violations of their fundamental human rights.

According to the police officers, the government has blatantly defied their pleas to pay them which is making life for them uncomfortable and disturbing hence their difficulties in providing the needs and wants of their wives and children because, they do not have the wherewithal to do so.

The police officers further argued that, whilst their monthly payments have not been forthcoming, the stipend and allowances used to be giving them previous too, had been ceased from coming into their pockets for over one year now and thus, financially incapacitated their ability in supplying and supporting with the demands of their wives which they have been married to.

The police officers stated that because of how things have turned out for them financially due to the feet dragging attitudes on the part of the government of the day, those who are into okada riding businesses are the ones who are feeding their wives and by an extension, sleeping with them in some glaring instances while others snatch their colleagues wives from them because, they do not have the means to providing them with what they are in need of.

They therefore humbly appeal with the Buhari regime to expedite actions and see how best they could remedy these desecration and abomination conducts being exhibited against their legally married wives by paying them for what they have worked assiduously for in the past eighteen months.