A High Court in the Tema area, has granted a bail application filed by the legal luminaries of the man in the cooler on charges of treason felony which is a grave offense under the 1992 constitution of the Republic Of Ghana.

Oliver Bakah Vormawor, a staunch ally of the group called “Fix The County Alliance” was picked up and later detained on ground of causing hysteria, fear and panic, emanating from his alleged Facebook view he shared with his followers a fortnight ago. 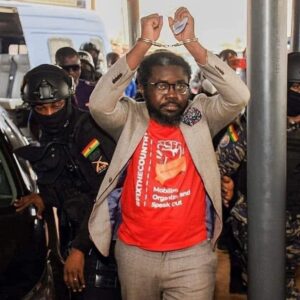 Oliver Bakah Vormawor, is being held for the remarks or comments he allegedly made on matters of coup that might unfold in Ghana if or when the so called e-levy proposed by the minister of finance and economic planning,  is passed by the majority members in Parliament.

Bear it in mind that, the same finance ministry that the finance minister oversees, voluminously owes the Electricity Company Of Ghana with a whopping debt of over; four hundred and twenty thousand Ghana cedis. Well, posterity will judge us all.