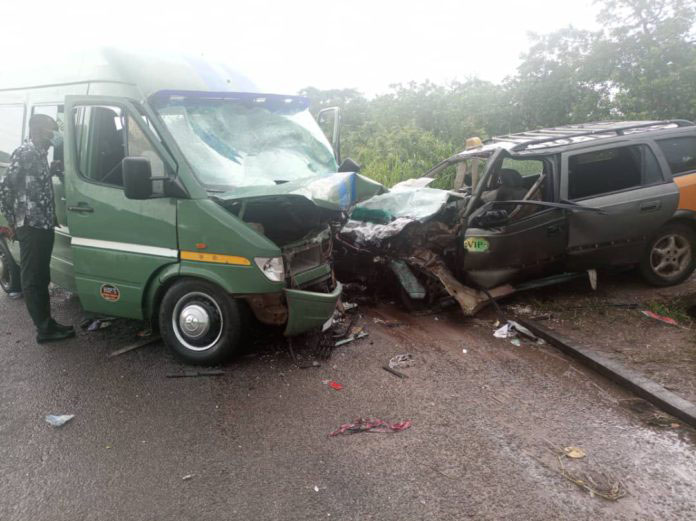 A car crash involving a Benz Sprinter and a taxi cab on the Wenchi – Techiman Highway in the Bono East Region has claimed a life.

The Wenchi District Police Commander, Deputy Superintendent of Police ( DSP) Kofi Odro Amponsah, said his outfit had a distress call about the accident just after the Nkonsia Police Barrier.

This, he said, was on Tuesday evening at about 6:00 pm so they hurriedly rushed to the scene.

DSP Amponsah explained that the Benz Sprinter, which was travelling from Kumasi to Wa, made a wrong overtaking.

“The Driver of the Benz Sprinter heading towards Wa attempted to overtake leading to head-on with the Opel Astra which was heading towards Techiman from Wenchi,” he told Adom News.

He said four passengers were in critical condition and were rushed to the Wenchi Methodist Hospital for treatment.

The body of the deceased, Francis Eleweh age 36, has been sent to the Wenchi Methodist Hospital morgue for preservation and autopsy, the Wenchi Divisional Commander of Motor Traffic and Transport Department of the Ghana Police, said.

The brother of the deceased, Kwame Waanaa, said his late brother left behind his pregnant wife and two children.