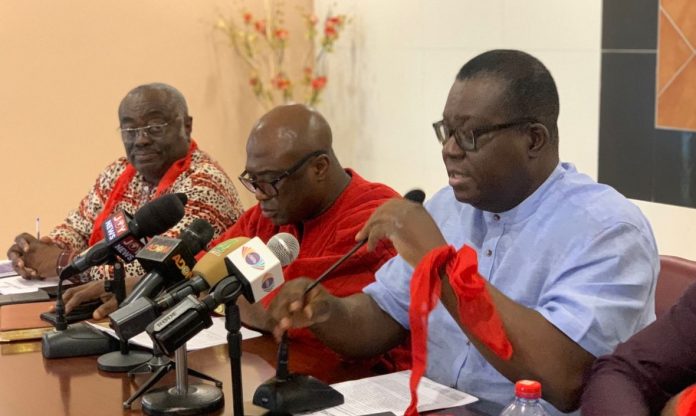 The workers in the public sector of the economy, have sent a very strongly worded statement to the government of Ghana to urgently do something drastic to alleviate the negative impacts of the economy which is harshly having tolls on the lives of people in the country without any remedy being processed by the leadership of the country were still things continue to head towards the wrong direction as it has been the case as usual.

The labour unions have teamed up against the government currently to ask for better conditions of service from government because, in their various opinions, the earlier 15% increment on the cost of living allowance, is a total pinnace and for that reason it does not help them in any as prices of goods and services are still rising up in the country exponentially causing difficult and austere economic misfortunes where it is practically impossible for them to save money for other important demands that they need the most but due to the challenges faced by the workers in Ghana as a matter of the economic infractions caused by profligate spending and financial malfeasance incurred by certain elements who associated themselves with the machinery of government and the leadership of the country as well because there is no tangible justification to refute the assertion that government officials are seriously corrupt on ground that they believe they are hitting the nail right on the head due to the current happenings ongoing in the nation.

According to organised labour, which is made up of group representatives and members from different sectors of the working fronts, identified that, the government can not deny the core fact that things have sprung up more than expected in the country when it comes to prices of goods and services coupled with high cost of living because the fifteen percent increment on the salaries of public sector workers which took effect from this very July, it would not be enough to cushion them against the severe austerities under which this present economic regime is leading them to and by the means of that, they are also pleading with the government to take into total consideration, the prevailing economic infractions in the country at the moment and have mercy on them and adjust the cost of living allowance to 20% but without that or if the government fails in complying with their request or appeal, they will take the next line of actions and that is, to embark on sit down strike to press government to do something differently about their plights regarding the unfriendly environment created by the debilitating comatose state of the economy incurring financial challenges for employees in the country.

They believe that, if the government does something reasonable about the cost of living allowance they are demanding, they will also put up their best in the discharge of their duties, as usual, to help grow the economy.