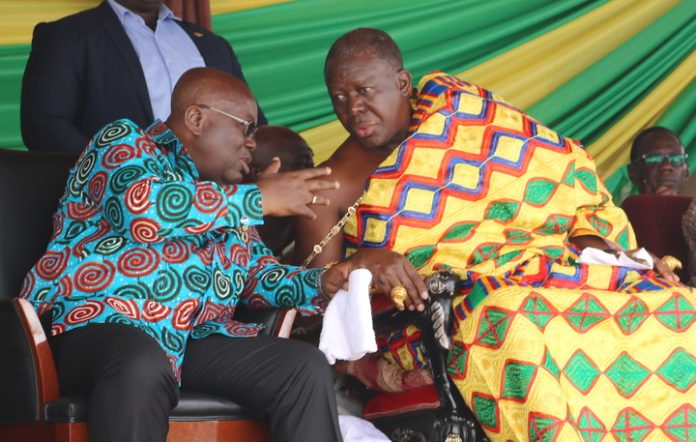 The Otumfuo Osei Tutu II has called on the government as a matter of an urgency, to prioritize the development of the Ashanti Region because it is always being touted as the world bank of the governing New Patriotic Party, and the current president Nana Addo Dankwa Akufo Addo.

According to Otumfuo, he does not doubt that indeed his region is perceived and perceived to be voting usually in favor of the New Patriotic Party but as it is in power at this present juncture, the party must fulfill all of its promises made to the electorates before and during campaign season by furnishing the region with massive developmental projects to match up with what has been granted to the party because of the trust and confidence the citizens in that part of the country have reposed in the party.

The Ashanti region, has been in the good book of the governing New Patriotic Party in terms of gaining votes from the residents but when it comes to changing and transforming lives to giving a facelift to the indigenous people living in the region, it then becomes hook line and sinker due to that, the community members have become apprehensive of government neglect about the people residing in that Region.

It is as a result of that, the constituents of the Suame electoral area had recently declared their member of Parliament persona non grata, and based on that premise, they promised to lynch him wherever he would be found in the constituency or any other place in the country so that they could smear hot pepper on his face and teach him a bitter lesson to serve as a deterrent to other members of Parliament who have forgotten about the numerous promises they made to their electorates.

The residents of the Suame electoral area and a constituency by an extension launched their member of Parliament, Osei Kyei Mensah Bonsu, a spirited defense by attacking him personally and throwing various kinds of harmful objects against his assets in the full glare of the public but due to the timely response from the security forces available and those present, his life was rescued from the hands of such ruthless and uncivilized individuals who unleashed the harm on him.

The member of Parliament for Suame is the current majority leader in Parliament and the head of government business and because of his hectic schedule, he does not have ample time to visit his people in the region and constituency regularly as expected of him by the people who gave him the political limelights to be their only representative in the house of Parliament to addressing and championing the cause of development by facilitating such through government and other benevolent organizations through which massive developmental projects could be seen in the region as a sign of his support and care for the people in those communities under the watch of his constituency.