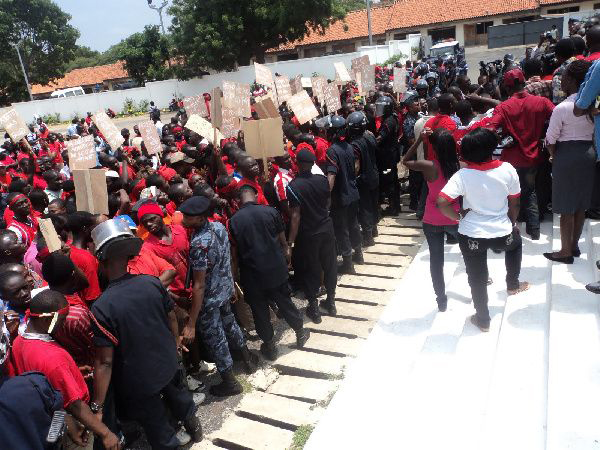 The staff of the Panteng Hospital in the Adentan Municipality of the Greater Accra has embarked on an indefinite strike over security concerns on Monday, June 28, 2021.
According to the staff, the activities of land guards on a parcel of land amidst periodic gunshots and rampant robberies and attacks on some workers remain issues that put their safety under threat.

The hospital has since 2013 called on the government to fence the facility to prevent private individuals from encroaching on their property but the call has remained unfulfilled.

This has led to the health workers hitting the streets of Panteng to demonstrate to register their displeasure.

The demonstrating workers numbering about a hundred say their lives are at risk hence their decision to go on strike until the hospital is fenced.

Speaking to Accra based radio station, Citi News, monitored by Graphic Online, the Ghana Medical Association (GMA) Local Chapter Representative at the hospital, Dr Alex Owusu Ansah said it was high time to demand that duty bearers resolve the worsened occurrence, protect the lives of staff and people living around the hospital.

He added that “Now we are saying that we are pleading for a safe working environment, so, for now, we as staff of the hospital are moving away from danger, if the management cannot manage the patients, then they have to discharge them.