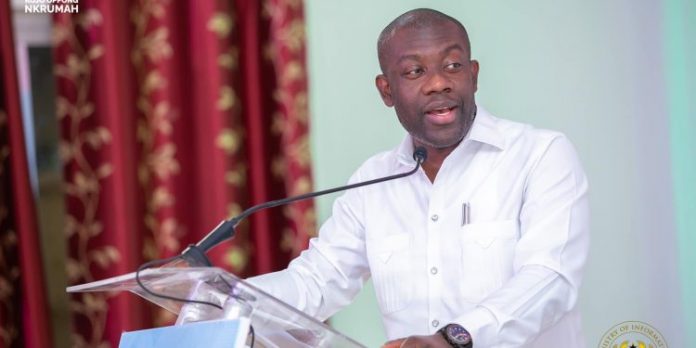 The minister for information, Hon. Kojo Oppong Nkrumah, has stated that, recent security instabilities in Ghana and other parts of the world, are his major concerns.

According to him, the threats of terrorism coming from the camp of suspicious elements who are determined to causing insecurity and mayhem are really worrying for; he is monitoring things keenly with eager eyes.

In the early part of last week, some unknown hoodlums suspected to be terrorists invaded markets in the Binduri area and set ablaze properties worth of several millions of Ghana cedis thereby beating up traders and causing some of the women to flee for their dear lives leaving their precious goods behind.

According to Kojo Oppong Nkrumah, he is of the firm conviction that, our security forces are always on a high alert so as to forestall any possible incursion from the activities of the enemies of Ghana.

He also urged everyone to be concerned about his or her personal security and be on the lookout for any anonymous members of their communities. The ministry of the interior cautioned the citizens of Ghana after it gathered some reliable information that some terrorists are trying to launch attacks on the nation without any cause.

It is quite prevalent how foes of peace and tranquility are on the verge of causing chaos and commotion to satisfy their egos without any feeling for humanity. Nigeria is also battling with Boko haram group in the Northern part of the country but now that the group is expanding its territories to other centres, it is a major problem to many governments and how to deal with their insurrections to maintain peace and security for their citizens. Ghana’s military apparatus is a well established and formidable institution to combating terrorism to help decrease their threats on countries.

Ghanaians are now on the lookout for suspected enemies of peace to assist in keeping them silent auction so that their evil agenda would be cut short to restoring total peace in the country.

The minister indicated that, due to the disturbances in other neighbouring countries as a result of the terrorists attacks, are his only headache because, without security and stability, there is no development for our country, Ghana. He is therefore, urging all and sundry to report anyone who they are not sure of in their surroundings to the public security officials.