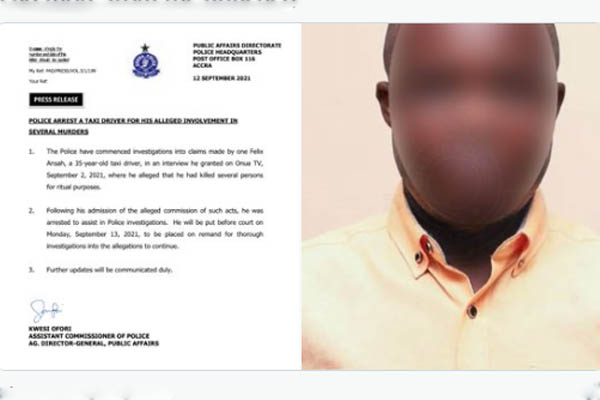 The Ghana Police Service has arrested a Taxi Driver who confessed to killing several people for rituals.

The Taxi Driver known as Felix Ansah made the shocking revelations about his involvement in ritual killings while speaking on Accra-based Onua TV on September 2, 2021. The taxi driver alleged that he has been killing people and selling their parts to Ghanaian politicians for ritual purposes.

According to the statement released by the Police on Sunday, September 12, 2021, Felix Ansah will be put before court today thus Monday, September 13, 2021, to be placed on remand to enable thorough investigations into the allegations to continue.

The Police have commenced investigations into claims made by one Felix Ansah, a 35-year-old taxi driver, in an interview he granted on Onua TV, September 2, 2021, read more from the attached pic.twitter.com/pS039R5tBz