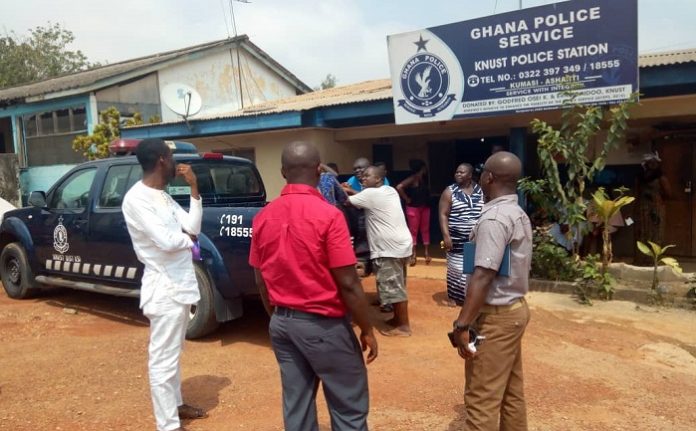 There has been an easy calm in the learning campus of the Kwame Nkrumah University of Science and Technology, KNUST, in the Ashanti region after students of the school, clashed and caused serious damages to lives and properties of some individuals and the school in general.

The students of the school, recently engaged in warfare as it happened at the University of Ghana Legon after few of the learners broke down expensive belongings including vehicles and statues of the school administration.

On the campus of Kwame Nkrumah University of Science and Technology, students living at Katanga and Conti, blocks, clashed and fought one another as if they were in their personal houses where they could have the impetus to embark upon what ever pleases them.

There are some kinds of issues to be settled down with amongst those occupants of Conti blocks and Katanga halls arising out of having supreme powers over the other the same way it transpired between the Legon students when they engaged ones another in a battle of war where others broke bottles and threw them against their rivals as a means of avenging themselves as police officers looked on helplessly.

Notoriety has indulged numberless of our educational institutions nowadays as the authorities struggle to contain the embarrassing effects of such abnormalities emanating from those uncultured swines who think they have sovereign supremacy over their right thinking administrative professionals whose duties are to regulate their various school behaviours exhibited and activities to be engaged in when they are in the jurisdiction of the school management.

There is the growing incident of an indiscipline culture spreading quick and fast in many of the educational institutions across the whole country as lawlessness takes over the very moral fabric laid down as means to instill moral and academic discipline in the students but they are resisting it with full force and any meaningful action that the management intends to take against such recalcitrant individuals then it seems the management is only trying to be harsh and unpleasant on those riffraff miscreants whose conducts have reared their ugly heads in the full glare of the general public without feeling ashamed and disgusted of their repressive and repugnant attitudes in the schools.

Nowadays, students behave as those they were already adults because of human right issue prevailing in the country at the moment with the sense that the moment any stringent action is taken against any of such stubborn and stiff-necked students, then you will hear on the airwaves that the fundamental human rights of those uncouth mouth individuals, are being infringed upon and violated.

Because of such mind bugging issues, the students have taken the school leaders for granted with the reason that, according to the students own thoughts, there is nothing significant that they will do against them meaning, everything they say as management bodies, they do not carry it or apply it to the latter.