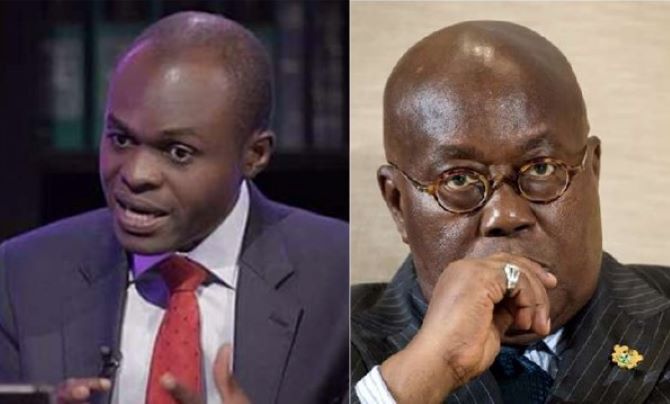 A private legal practitioner, who was in the media scenes for his unpalatable and malicious statements he willfully made against the personality of the president of the Republic of Ghana, Nana Addo Dankwa Akufo Addo, labeling and branding the president as a “criminal syndicate” member, has taken a reversed position to profusely, render an unqualified apology from his deepest heart to the first gentleman of the land.

Martin Kpebu apologizes after his unsavory and unprintable words he intentionally insinuated on the president and his august office for that matter, attributing it to the failures of the president to tackle and fight the perceived damaging ramifications of the corruption menace in Ghana due to the increasing level of economic debacles, asserted over the weekend that, the president himself is part of the people who are seriously looting and sharing the national resources amongst themselves and as a result of that unsubstantiated assumption, he described him as a criminal syndicate member because they are the same people who are destroying the very stability of the country by stealing and sharing the proceeds among themselves with impunity.

According to Martin Kpebu, he strongly upholds and believes that, if they were not to be thieves in this current political dispensation under his tutelage as he calls himself a corruption fighter or an anti-corruption crusader, by now, the country Ghana, would have been the cleanest ever devoid of malpractices and bribery and corruption related cases that is fast eroding the very moral fabric of the nation under the watch of Akufo Addo but because he is also a beneficiary and a larger shareholder, he seems adamant and feels comfortable about the increasing cases of reported instances of corruption in the country and as a whole, the nation is critically in an economic quagmire status and debilitating comatose; inflicting and incurring severe austerities under his presidency with lamentations from all Ghanaian people blaming and castigating him for a total collapse of the economy.

But after all the above deadly missiles and salvos thrown at the president without any official response from the office of the president in a rebuttal of his repugnant and repressive conducts exhibited on the first statesman, Martin kpebu came into his five senses as a reasonable individual that, what he churned out on the personality of the president and his enviable office, he has therefore, unreservedly and profusely, withdrawn and apologised to the president and thus, henceforth, he will not allow or permit such filthy and uncivilised remarks to proceed from his mouth again and as such, he has therefore, rendered completely, his heartfelt apology to the president saying, ” he is a child to the president and for that matter, the president should find a place in his heart and forgive him because, if a child defecates on the lap of his mother, the mother does not use a knife to collect the excreta on her but rather, she uses water to cleanse it from her lap because it is assumed by her that, the child is totally ignorant.

In the case of Martin Kpebu, a well-known and celebrated legal luminary who is acclaimed nationwide due to his legal acumen and dexterity in how he delves into matters about national interest dispassionately without fear or favor has completely lost touch with his thinking faculties as he went berserk and gaga on the prevailing economic crises in the country sweeping over the head to the toenails where stringent and resilient economic measures are far from being implemented to arresting the high cost of living standard in the nation as the alarming rates at which the local currency is briskly depreciating against major foreign trading currencies across the world.

Well, we have heard from the horse’s uncouth mouth that he has repented, and thus, turning into a new leaf and based on his confessions, we have to take him by his own words and let sleeping dogs lie peacefully.

But it is not, however, clear, how come the media house on which he used such derogatory and riffraff speeches, could not quickly draw his attention to the flammable statements he was making on the president but in turn, it has to take him as an individual to return to his normal senses and say, he has not behaved like a matured person who is learned.