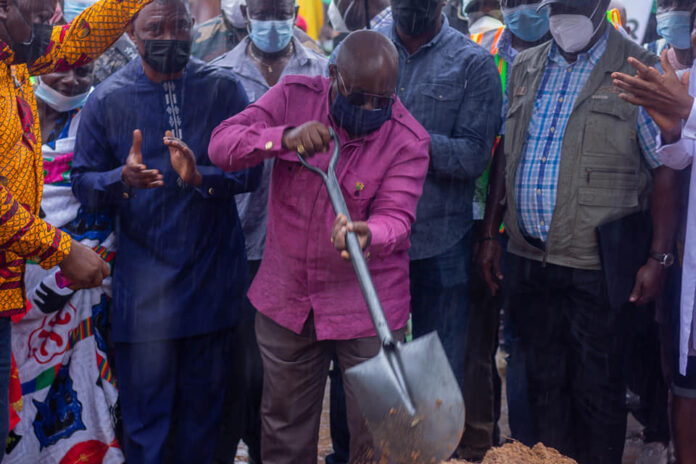 President Nana Addo Dankwa Akufo-Addo on Saturday, September 4, cut sod for the reconstruction of the Tarkwa-Agona-Nkwanta road as part of his tour of the Western Region.

The Tarkwa – Agona-Nkwanta 66-kilometer route also referred to as Inter-Regional Route 6 (IR6) under the Trunk Road System of the Ministry of Roads and Highways will be constructed by Gabriel Couto and Rongo construction and is expected to be completed within thirty-Six months (36) months.

At the groundbreaking ceremony at the University basis school (UBas) , Nana Kwabena Gyan, Chief of Mahamo who double as Chairman of Tarkwa Nsuaem divisional Chief, expressed gratitude to President Akufo-Addo for fulfilling his promise to improve the road infrastructure in the area.

He pleaded with the President to provide a boys dormitory and a school bus for the Benso Senior Technical School in the Tarkwa Nsuaem municipal.
The revered Chief made a passionate appeal to President Nana Addo Dankwa Akufo-Addo to maintain the Municipal Chief Executive Honorable Benjamin Kessie who has a good working relationship with the MP and continue with his good works and ensure development to Tarkwa Nsuaem.

The Roads and Highways Minister, Hon. Amoako-Atta said, the Route connects the mineral and agricultural rich lands in the Western, Ashanti, Western North and Central Regions to the Port of Takoradi.

“Many of the famous mining towns can be linked easily via this section of the IR6. Some of the towns are Bibiani, Sefwi Wiaoso, Obuasi, Dunkwa, Ayamfuri and Tarkwa.
IR6 also intersects the National Route 1 (N1) at Apimanim. The N1 is the national route that links Ghana to La Cote D’Ivoire and Togo.

The completion of the section will remove the usual congestion along the road, especially, the drudgery at Tarkwa, the famous mining town.” he stated.

The road minister assured the people of Tarkwa Nsuaem that, the sum of money for the project is available and will Never stall until it’s completion, adding that the project will have a two way single carriage lane asphalt concrete finish with many drainage improvement and provision of street lights in the whole villages and towns along the entire stretch between Tarkwa and Agona-Tarkwa.
Hon. Amoako Atta said the completion of the project will see Tarkwa township elevated into a modern city with amenities and facilities that it required.

In his remarks to the gathering, the President indicated one of the reasons for his tour of the region and thank the chiefs and people for the big support they gave him and Hon. George Mireku Duker during last December’s Presidential and Parliamentary elections.
The President expressed appreciation not for retaining the MP , but also for his qualities and abilities in appointing him as the deputy minister for Lands and Natural Resource.

For the reappointment of the Municipal Chief Executive, Hon. Benjamin Kessie, President tells Nana Kwabena Gyan II, that he have heard it and will hear from him.