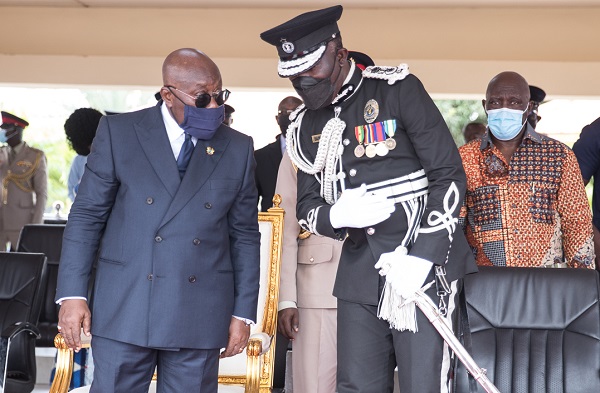 The president of the Republic of Ghana, His Excellency Nana Addo Dankwa Akufo Addo, has praised the current Inspector General of Police, George Akufo Dampare, for what he called unprecedented transformation happening in the police administration under his enviable leadership and therefore applauded him for serving the country with his whole heart.

According to the president, it is under the tenure of the Inspector General of Police, George Akufo Dampare, that significant changes and leadership qualities are being exhibited at work by all the officers recruited by the service hierarchy to protect the country after they pass out through the laid down procedures and rudiments meant for the passing before getting the nod to be enlisted into the service for the full-time job opportunity.

The president who presented one thousand five hundred motorbikes to the police administration on Monday, humorously stated that he is highly elated to see the Inspector General of Police George Akufo Dampare at all times at the helm of affairs in restoring and maintaining law and order in the country because if he were not to have appointed him, he does not know where he would be with his personal life today. The appointment of George Akufo Dampare, received numerous opposition from a certain crop of people in society because he was considered as not the senior officer in the ranking and hierarchical regime of the Forces administration as other people were ahead of him in terms of leadership.

The president of Ghana is the appointing authority in choosing or appointing to office, the head of security agencies because is the commander in chief of the Ghana Armed Forces hence, he has the power to do so as enshrined in our constitution of the republic of Ghana.

It is the same era of the inspector general of police that the service has been branded under his jurisdiction as the second most corrupt public institution in Ghana after the office of the president coming first in the survey conducted by Global Info Analytics but today in the debatable history of Ghana, the same president is showering praises on his subject on the corruption league fixtures as the only inspector general of police who transformed and brought moral discipline into the police administration.