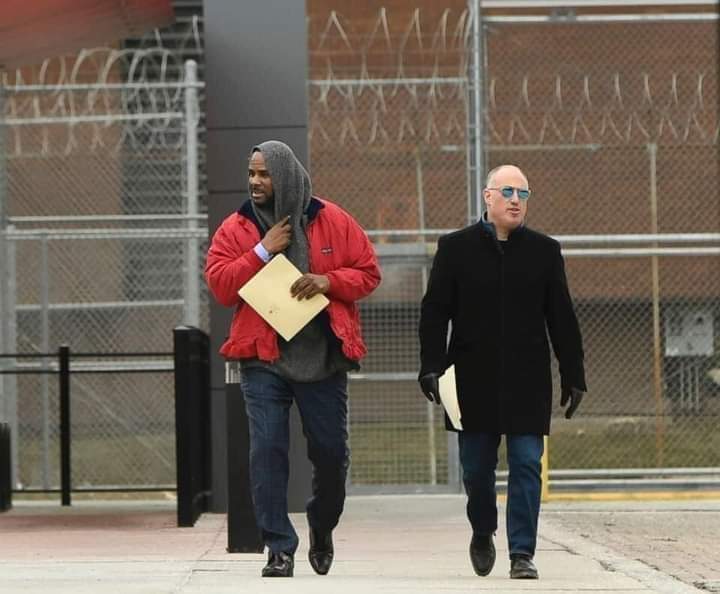 There’s currently a photograph circulating online that appears to show infamous singer R. Kelly walking away from prison, which has led to many asking has he been released?

The I Believe I Can Fly singer has faced allegations of sexual misconduct since the 1990s, and he was even indicted on child pornography charges in 2002. However, he was subsequently acquitted in 2008.

Nevertheless, Kelly continued to receive accusations of sexual abuse, often from minors. He was the subject of a high-profile docu-series Surviving R. Kelly, which detailed the various allegations against the singer and featured interviews with some of his alleged victims.

In February 2019, he was arrested on charges of sexual abuse in Chicago. And in July 2019, he was indicted once again, this time in New York, on a raft of various federal charges, including racketeering, sexual exploitation of a child, bribery, kidnapping, forced labor, and enticement.

Since his arrest, Kelly has been incarcerated at Chicago’s Metropolitan Correctional Center. The singer was denied bail, which means he’ll remain in the Windy City’s federal prison until his trial begins.

In the meantime, a photo circulating on Twitter has caused many folks to think that he was released early. The picture appears to show Kelly strolling away from a prison accompanied by a man who many thought might be his lawyer.

However, we can confirm that the singer has not been released and will remain in a Chicago cell until he goes on trial. The picture in question is an old photo. It was published in March 2019 by the Times Union and showed Kelly walking with his lawyer away from Cook County Jail after he had agreed to pay $100,000 in back child support that he owed at the time.

When is R. Kelly’s release date?
It is impossible to tell when R. Kelly will be a free man. He is facing multiple federal charges across numerous jurisdictions, and if he’s found guilty of all charges, he will likely remain behind bars for much of the rest of his life — if not all of it. He is likely to serve anywhere from 10 years to life if found guilty.

He was initially scheduled to face two separate federal trials, one in Chicago for April 2020 and another in New York for May. He was also due to stand trial in Cook County in September. However, the COVID-19 pandemic has severely hampered the schedule for trials by jury, meaning he is still awaiting his time in court.