The Chief Executive Officer of the National Lottery Authority, Sammy Awuku, wrote a simple message to the former captain of the Ghana Black Star.

This was in response to an official invitation from Asamoah Gyan to Sammy Awuku to be present at his book launch. Writing on his Facebook wall, Samm Awuku revealed that the former captain approached him in his office to invite him to the launch of his memoir.

“Thak you to the former Blackstars captain, Asamoah Gyan, for this rare opportunity and an invitation to the launch of your memoir. It will definitely be an honor to witness the unveiling of a book that gives us insight into your journey to becoming the legend that you are today and I know there will be a lot for the youth to appreciate from your story. Congratulations my brother”, he wrote on his Facebook wall.

He later dropped photos from the courtesy visit. 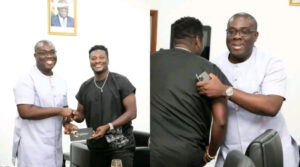