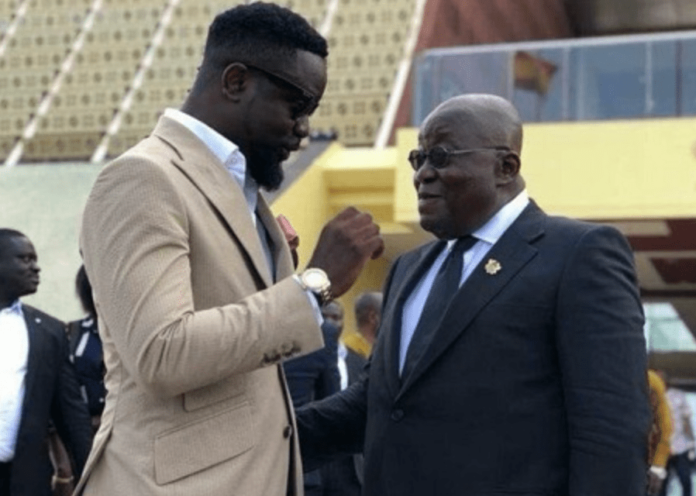 Ghanaian hip pop artist Sarkodie has been chastised on twitter for supporting the Npp. It must be recalled that during the administration of ex President John Dramani Mahama, Sarkodie recorded a song to lambast the administration when he felt the hardship in the country was soaring at an alarming rate.

The legendary award winning rapper who is set to host his rapperholic concert on December 25th in the capital received a lot of bashing on social media yesterday after a tweet in which he sort to address the pressing issues affecting most Ghanaians in the country.

The people are going through it !!! we always do!! all we ask  for is the right envinroment to hustle and be productive 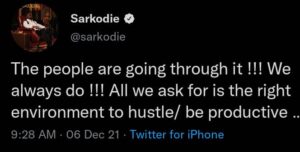 Blogger Bongo Ideas immediately who was in the news recently for indulging in cyber bullying and was disgarced on GHOne Tv by Nana Aba Anamoah, Bridget Otoo and Serwaa Amihere labelled the award winning rapper a hypocrite.

Kwame A-Plus who hitherto was a huge advocate for the President, His Excellency Nana Addo Dankwa Akuffo-Addo too to facebook to call Sarkodie out.

THE HYPOCRISY…..DURING JOHN MAHAMA TIME AS PRESIDENT THE HARDSHIP WAS CAUSED BY HIS INCOMPETENCE ABI? NOW THERE IS SERIOUS HARDSHIP UNDER AKUFFO ADDO, INSTEAD OF TELLING HIM THE TRUTH YOU ADDED WE ALWAYS DO TO MAKE YOU GOOD BEFORE THEM. WHEN YOU SPOKE ABOUT HARDSHIP UNDER JOHN MAHAMA DIDN’T WE ALWAYS DO? OR WE WERE LIVING IN SAN DIEGO BEFORE HE BECAME PRESIDENT? 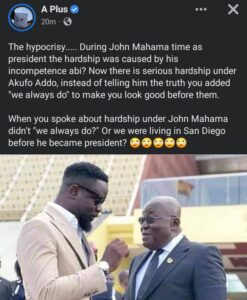 It must be recalled Sarkodie recorded two diss songs to vent his spleen on Ex President John Dramani Mahama and also took to twitter to criticize him  when the prices of fuel soared under his administration. 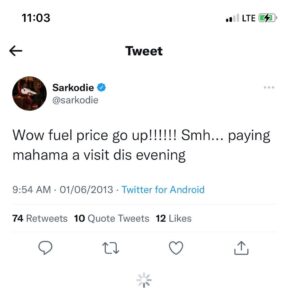 Others on twitter also weighed in on the rappers hypocrisy and didn’t spare him. One twitter influencer Ghana Yesu joined in on the subject 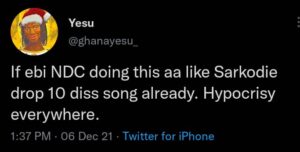 A RAPPER BOUGHT BY POLITICAL PARTY. SARKODIE IS A DISGRACE TO THE RAP GAME AND IT’S NOT EVEN FUNNY ANYMORE 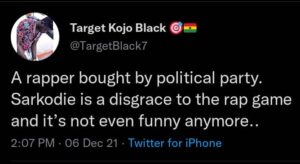 ONLY FOOLS WILL BUY TICKET TO SAROKODIE’S RAPPERHOLIC CONCERT, ASWEAE. I AM SURPRISED Y’ALL GET TIME FOR THAT STINGY GUY. MAHAMA ERA, HE TWEETED PLAINLY BUT NANA ADDO TIME, HE’S ADVISING SMH 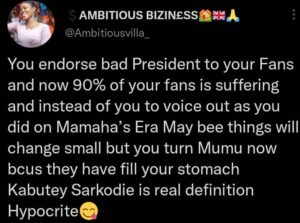 IF JESUS SELF TLK SAY KABUTEY SARKODIE FOR RELEASE DISS SONG AGAINST NANA ADDO GOVERNMENT AND GO TO HEAVEN FOR FREE SELF HE WILL NOT DO IT, MAN THINKS ABOUT HIS STOMACH MORE THAN HEAVEN SELF 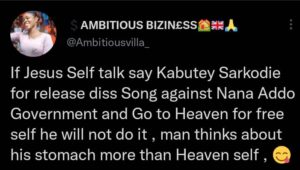 SARKODIE IS sELLINg THE TICKET FOR 400GH IN THIS HARDSHIP ECONOMY.. ADEN WO YE YESU EI