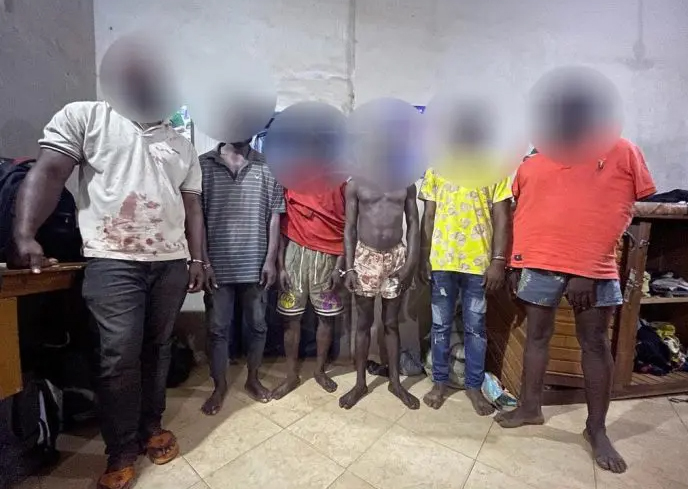 A total of six persons have been arrested by the Ghana Police officers in the Bono East region where they were alleged to have been terrorising the residents in the region.

According to the police officers, they received distressed calls from many people living in the community that they have been causing them them nightmares due to the frequent presence of their dangerous activities being embarked upon by such suspicious individuals in the area and based on that information communicated their reputable office, they have taken it upon themselves to make sure those rascals are fished out completely from our territories for peace and tranquility to prevail.

The six loca champions who think they can easily take advantages of the people residing in their various locations, stormed countless houses with harmful objects and implements just in their attempt to cause instability and panic amongst the citizens in the places where they are living to demand for their belongs and anyone who disobeys their orders, such a person will severely be dealt with.

They decided intentionally to engage themselves in such activities for the visibility of the police officers in the community is rare hence their plans of undertaking those illicit ventures to inciting residents against authorities in the region.

The individual members involved in the attacking of the residents are currently in the grip of the police administration in the region after their arrest for further and better investigations to be initiated into their conducts to ascertain if they work with other accomplices who may presently on the run for fear of being prosecuted.

The police officers have declared completely the overhaul of every form of business activities being embarked upon by the criminals in the region to a halt because, according to them, those practices are endangering the peace and security of the people dwelling in their houses without having calm thoughts to go about their normal engagements to make daily bread for their families and loved ones in the region and for that matter, they are going to be unkind to individuals who have taken it upon themselves to jeopardise the peace and security of the citizens and the country as a whole to serve as a deterrent to others who perhaps may be on the verge of planning the same activities to disturb the minds of Ghanaian people after their daily routine trading activities when they return home to have forty winks before the next day comes with its own issues.

Terrorism has been reported in many parts of the African continent where suspected members of boko haram group members and alquedaa network sects, have destroyed the peace and stability of many countries in the African soil without any restriction from the security forces in such turbulent dominated countries where Nigeria tops all in her experiences with the issues related to the activities of boko haram taking over the northern hemisphere of Nigeria.

Currently, Ghana is actually on a high alert of any possible incursions from every form of terrorists activities that may likely launch attacks on the nation and the citizens as a whole, as the military forces and police officers have been dispatched to many border communities to gather details of any planned or intended purpose to be carried out by such faceless characters before such warlike thugs have stormed the towns of Bono East region with their “rambo style” of terrorising citizens in the areas just to cause paranoia amongst the people living in such places so that they could bow down to their demands of taking advantages of them through the means of defrauding and harassment.

But finally, the industrious police officers in the region have collaborated with one voice and action and they have detained them to put to an end their violent conducts in the region under control for peace and security to prevail.