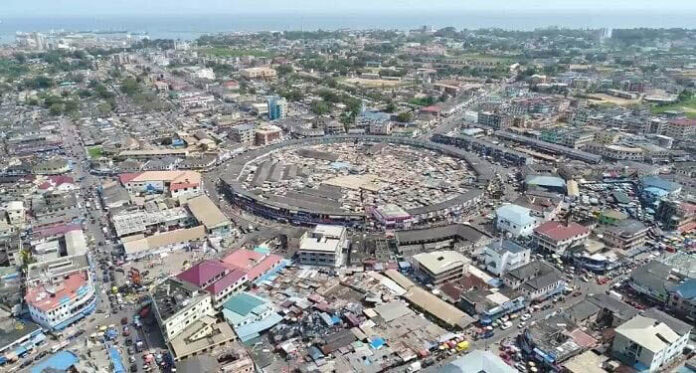 The entire structure has been finally pulled down to pave way for the construction of a new market.

Discussion for the construction of a new market to replace the dilapidated one has been on the drawing board for many years now.

The Takoradi Market Circle since its construction some 99 years ago has not seen any major rehabilitation and has developed several defects, raising safety concerns for traders and the rest of the general public who transact business there every passing second.

President Nana Akufo-Addo on August 21, 2020 cut the sod for the construction of a new market at a cost of €48 million.

The project will be financed by an export credit from the Deutsche Bank S.p.

Host assembly, the Sekondi Takoradi Metropolitan Assembly (STMA), handed over the market to the contractor Messrs Contracta Costruzioni Italia SLR in March 2021, after a rather protracted but successful relocation of traders to a temporary site for their trading activities.

Since then, the constructor has been chiselling, hammering and pulling down the old structure block by block.

The last piece of block was hammered away over the weekend and with that finally giving way for construction of a new market to begin in earnest.

When Connect FM visited the site Tuesday, July 6, some materials purported to be foundation materials were being transported to the site.

Barring any hold-ups, the project is expected to be completed within 30 months.

It will also have a police station, a fire station, a post office, a clinic, administrative offices, a waste separation dock and changing room for staff.

The Works Department of the Assembly believes trading activities will become more harmonized thereby enhancing the safety and security of both traders and their customers.

It will also increase the number of rentable shops, control human as well as vehicular traffic in and around the Central Business District of Takoradi, where the market is located.