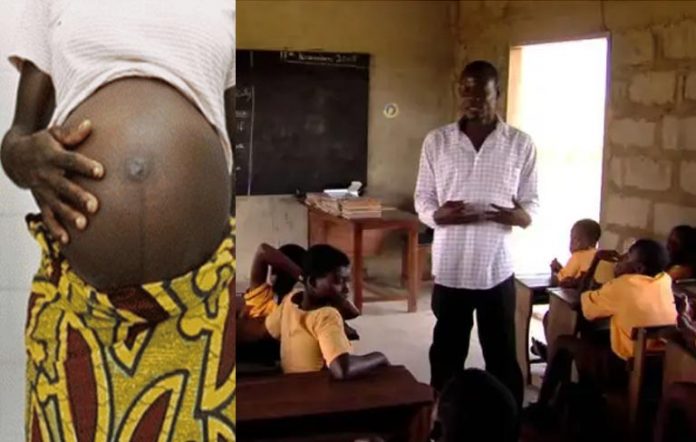 A teacher trainee who has been assigned by the Ghana Education Service under the Ministry of Education in Ghana, has been reported to impregnate his own students in a row totalling twenty four of them where it is alleged that there are female teachers also among those impregnated in the process.

It is wild and ridiculous that one particular teacher trainee who is still undergoing training to be fully equipped to teach students after completion of his course of studies, could take an advantage of such teenage girls who are vulnerable to molest and abuse them in that unjustifiable manner.

This bothers on how the background of those so called teacher trainees who think that their respective students are their heirs therefore they have the legal right to do anything they want with the students most expecially the female ones. It is quite common in the public schools where you can see students being pregnant for their own teachers and in some cases their lips are very tied up on the matter so that the anus of one person or the other would not be exposed to the general public.

The most intriguing part is where it is alleged that some female teachers who are old enough to be discerning from what is right and wrong also opened up their two legs widely for him to enjoy without any regrets. Many are wondering how come he was able to be sleeping with such larger number of people without the other ones familiarising themselves with the real situation on the ground.

The video of the so called teacher has gone viral with his face and the pictures of some of the teenage girls he engaged in sexual activities with before he had finally been uncovered.The teacher in question now is currently doing his attachment with that particular school he was sent to before he turned the noble profession into a motel where those girls he secretly slept with got pregnant in the process.

The matter is highly expected to travel very far so that the authorities in charge of the educational sector in the country to delve very deep into the issue and cause him to face the music. It is mind bugging how one teacher trainee who is not even fully equipped or trained yet completely could just abuse the fundamental human rights of those defenceless children whose parents may not even be aware of the whole event.

People in the chalk fraternity most importantly those in the public sector, have a lot of scary and horrifying testimonies to share if they are called up to testify as to what they know about the whole incident and you are likely to hear injustices that the girls especially in the public schools are facing without receiving any attention.

Such teacher trainees, when they are assigned to some public schools where they know that the level of educational background of those who reside in the community are somehow low, they try to use those girls as their sex toys and slaves where even for those so predators to take proper care of the girls they will not do it because they think the girls are of low class and they the girls can not question them about anything and due to that, they use them to do anything at all they intend to do so with them.

It is also common in the public schools where some indecent teachers would impregnate some of the female children and buy them either concoctions or any other medications to that they would terminate the pregnancies secretly without the knowledge of their various parents and in the events leading to that, some few of the parents only get to know later when their female wards are bleeding profusely through their reproductive system because the foetus of the girl involved in the alleged abortion instance, has been damaged.