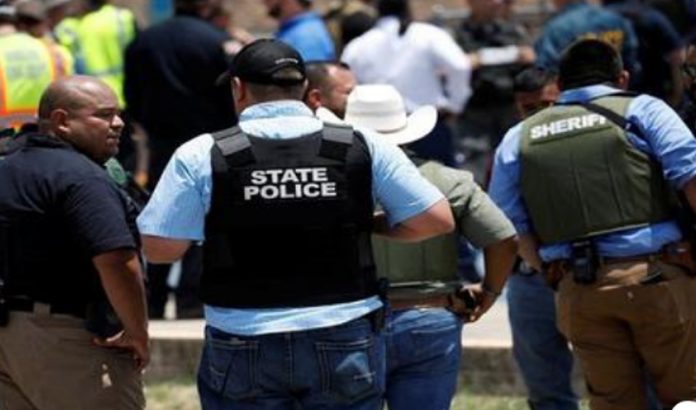 Total catastrophe and state of emergency was observed yesterday in the US State of Texas where an eighteen year old opened fire on students in a school while over dozens of learners including teachers, gave up their ghosts.

The 18 years old teenager, managed craftily and intruded into the territory of the school authority without their knowledge and shot dead 18 students and teachers then after that, abducted other staff members including some senior officials of the school.

It is quite baffling how an eighteen year old could cunningly plan such a well executed atrocious crime and committed same where he was not caught up or arrested in the process or afterwards.

The governor of the United State of Texas, Creg Abbott, has confirmed such a deadly event stating that the security apparatus is currently monitoring happenings keenly to unravel the true state of the event and to apprehend the crime suspect to be jailed in the reason of time.

The mass killing of the students, has sent many into a state of mourning as the governor commiserated with the bereaved families of those who have lost their beloved relatives in the cause of such unsightly and dastardly acts with an impunity.

The governor Creg Abbott used the opportunity to assure the distraught relatives that, they should be rest assured that, by hook or crook, justice would surely be served to calm down the nerves of the traumatised and to restoring confidence in the state security apparatus that, yes indeed, the safekeeping and guaranteed peace of the US citizens, is a very crucial first class priority to his administration. A state of emergency has been declared in an attempt to restore tranquility and to Colden off the scenes of the scene at where such a tragedy has occurred.

Due to what the teenage gun welding eighteen year old boy has caused to the students and the administration of Governor Creg Abbott, fear has gripped the entire county dwellers as to what measure to adopt today as their hope to go all out to undertake their scheduled activities to increase productivity.

It is not however clear as to whether there were closed circuit television cameras installed in the school premises or not . but whatever the case of this very unfolding ugly spectacle may be, peace and security of the students must be guaranteed.