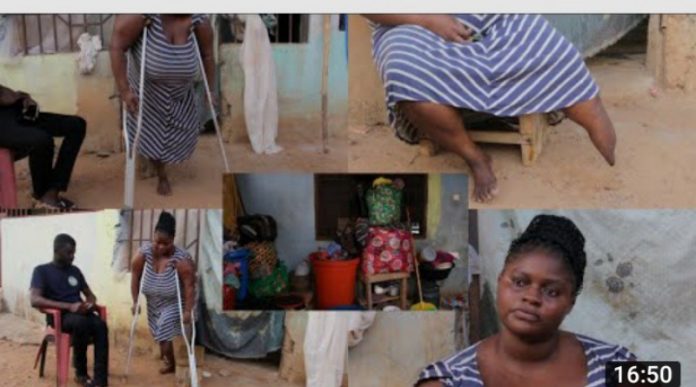 A 28 years old Lady called Serwaa Francisca from Kumawu was living peacefully with her boyfriend.

They gave birth to one child after some time of staying together. The Lady said her father died about 4 years ago and her mother too fell sick after the death of her father. Two years ago she too was involved in a terrible accident in their village.

They were only four passengers in the car when the incident occurred. Serwaa was severely injured on her knee but the other three did not sustain any injuries. Instead of the driver to take her to the hospital for treatment, he convinced her mother to send Serwaa to a herbalist he knows at his village to use herbal medicine to treat her knee. The amount of money the herbalist too requested for the treatment was too much for them to pay.

The driver didn’t come there again after he left Serwaa and her mother at that place. The woman came back home whilst her leg was not healed, she started experiencing severe pains in her knee, she was then sent to Okomfo Anokye Teaching Hospital and was admitted at the hospital for two weeks without any of the nurses attending to her due to financial crisis. When the nurses attended to her, the leg was rotten and the flesh shed off from her bone.

The doctors were not having any other options than to cut off the leg to save her life. One of the doctors devoted himself to help her take the cost of her operation. After she was discharged from the hospital, she was not able to pay her house rent, she has to move out of her room and went to sleep at someone’s porch. The father of her child too left her after she went through the surgery and her leg was cut off.

He doesn’t even cater for their only child, Serwaa said the guy was not like that before she went into that condition. The lady is not having any work to do because of her disability. She is having crutches to move around but she can’t used it for longer periods. She continued that sometimes she lost hope and even decides to end her life but because of her child she was not able to do it.