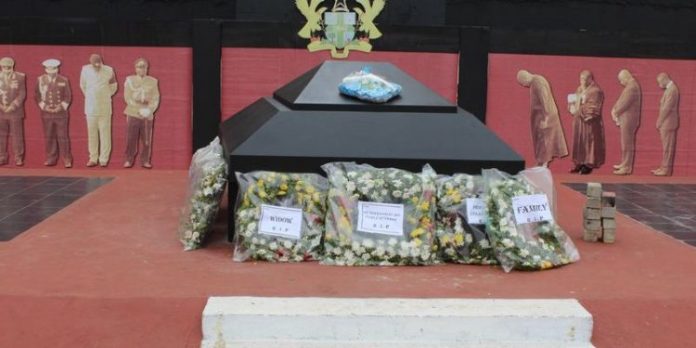 The tomb of the late president of the Republic of Ghana, Prof John Evans Atta Mills, has been reported tampered with in the processes leading to and during the renovation activities on the part to giving a facelift to the ex-leader of the country.

But according to a brother of the late president, who is also a member of Parliament from the Central region, strongly upholds that, the tomb in which the former president had been entombed, had been tampered with and looted by certain elements he believes would be certain suspected people parading themselves as the ones who think they love the former president more than any other person else in this country.

According to Hon. Samuel Atta Mills went to the Asomdwe Park where his brother had been buried after his sudden demise, and to his surprise, he fought the grave tampered with and looted because, in his view, there were some portions of the grave cut down or pilled off which he is due events of that, though it would be a looting brigade combat against the body of his late brother that has been laid down in the tomb to continue with his final rest.

It has been reported also by a certain crop of people including some selected media channels in the country that the body of the late president had been taken out from the grave at the Asomdwe Park where there is a remodeling activity ongoing to renovate the entire part of the center where the past president of the Republic of Ghana, Prof John Evans Atta Mills is laid down securely after his tragic death for almost a decade ago which some people even suspected that he did not die through natural causes but rather through some mysterious accounts which must still be explained to the immediate family and the good people of Ghana because he was a national asset to the country and the world as a whole.

The information communicated to the media scenes about the claims made by the younger brother of the late professor of law that, his brother’s tomb has been tampered and looted by certain elements he suspected to be the brain behind the so called remodeling campaign and activities, would be the very individuals to answer pending questions pertaining to how the tomb in which the brother had been buried could not be looking intact or exactly the same way they used to know it to be but suddenly, they moment they announced of the remodeling activities to be carried out on the resting place for the departed late president, then all of a sudden, they have endangered the outlook of the grave looking different from how it used to be looking like after the former president had been laid to rest at the Asomdwe Park after back and forth conflicting records churned out between the state and the immediate family as to where exactly his body must be buried but finally, the state won the battle and decided to bury the president at the Asomdwe Park which the immediate family thought should have been taken to his hometown in the Central region of Otuam.

According to Korku Anyidoho, a former aide to the late president, the family of the late president, was duly informed before every form of renovation activities had been embarked upon and for that matter, they are very much aware of the remodeling works ongoing currently at the Asomdwe Park which would be inaugurated in few days hereafter.

He dispelled every iota of rumor churned out by the brother of the late president who seeks to portray his unsubstantiated claims against the managers of the center that his brother’s tomb has been tampered with and looted to disregard such dangerous comments proceeding from his mouth because there is no way such a heinous activity could go own in the sense that, the late president’s family members were respectfully communicated to before their activities in remodeling the Asomdwe Park, kicked off in their bid to beautify the place.

In another development, there is trending news lingering around like a wildfire that, the hierarchy of the political party on which he ran as a presidential candidate before he finally won the presidential election, rejected invitations from the management overseeing the activities relating to the renovation activities of the Asomdwe Park for the inauguration ceremony in few days from here, refused to honor the invitation to be on the ceremonial ground.