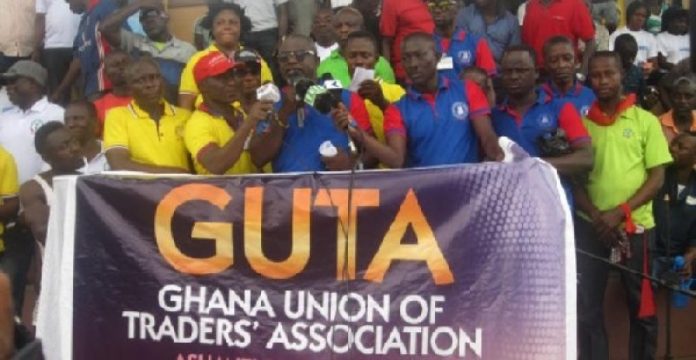 The Ghana Union Traders’ Association, GUTA, has asserted that the failures being seen by the crippling effects of the Ghanaian economy, is as a result of the Influxes of Chinese goods in the Ghanaian markets without any approval from the authorities who are in charge of overseeing the activities of business and trading relating issues because they have the means to pass through unapproved routes and loopholes at the country ports and borders.

According to GUTA, it is as a result of that, the economy of Ghana is not receiving any significant growth because Nigerian nationals are also coming into the nation with their cheap products causing the cedis which is the local currency in exchange for goods and services, to depreciate marginally without restrictions from further falling.

In the views of GUTA members, there is no way the economy of Ghana is going to receive a facelift unless the intrusion of goods brought into the country by the Chinese and Nigerian business owners whose products are unwholesome and because of that, they are being sold out on low prices causing the genuine goods and services of the Ghanaian businesses not to be patronized with the sense that, they are of high cost even though they are credible and durable and not the fake products that the Chinese nationals have smuggled into the country without approval.

Therefore, GUTA members are currently, appealing to the trades and industry ministry to as a matter of an urgency, do something drastic in flashing out goods that have invaded the Ghanaian markets by the foreign nationals who are directly and indirectly impeding the financial development of the Ghanaian economy and that is the main purpose why there is no progress on the economic fronts of the country.

The remarks made by the members of GUTA had been supported by some other aggrieved Ghanaian business owners who have attributed the low cost of productivity and challenges being faced by the economic impacts of the Ghanaian economy, to the sprawling effects of the emerging Influxes of the goods coming from China and Nigeria into the country because they have the wherewithal to grease the palms of officials operating at the Ghanaian borders and ports due to the corruption related cases being reported by various business owners who are into trading activities.

The perceived criminal activities ongoing in the Ghanaian ports and borders have been occurring for many years now without any remedies to it as a way of eliminating foreign goods from coming into the country because the Ghanaian officers at our various entry points, are there working for their own parochial interests and not for the development of the country and based on that undeniable fact, goods coming from foreign countries are easily permitted into the country where charges expected to be paid as duties, are paid into the personal pockets of few individuals at the detriment of the people doing businesses and the country as a whole and it was at that very premise, the late former president John Evans Atta Mills, after scrutinising the startling exposé’s revealed by Anas Aremeyaw Anas, when he carefully, did an investigate piece about harrowing instances of bribery and corruption related cases at the Ghanaian ports and borders which compelled him to personally express his uttermost disgust and revulsion at the rate at which officials working at our various borders and ports would just assume offices and within two to three years, they are putting up first class buildings where others would venture into purchasing four wheeled drives because, they are officers working at ports and borders.

Therefore, the sentiments espoused by the members of GUTA, would not shock or surprise anyone whose eyes are on the activities relating to ports and borders operations when it comes to matters regarding checking and monitoring what comes or goes out of the country. The rate at which export activities go on in the nation is depleting but, the imports of goods and services into the country, are rising exponentially which tells that, Ghanaian officers at various checking points, are frustrating and obstructing Ghanaian business owners who intend to embark on activities concerning such issues but they would rather team up with the foreigners by receiving financial inducements where they are left out of the hook to carry out anything they want to do without hesitation.