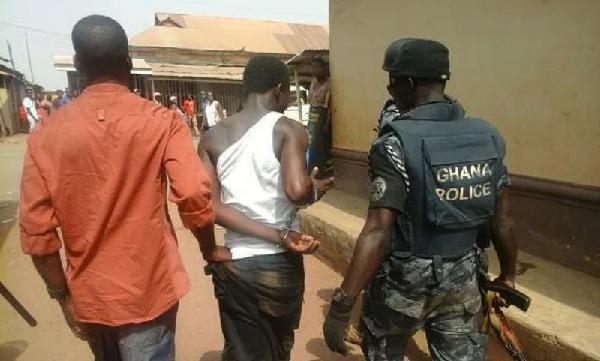 The Police Officers in the Konongo area, have arrested three people suspected to be the architects behind the killing of a fifteen years old girl in the community with a knife.

According to the police officers, they received a distress call that, some unknown assailants have mounted an ambush on one young girl, Regina Sarfo and murdered her while dumping her lifeless body in the bush at a place called Ahenbrom, a suburb of Konongo.

They have therefore, arrested three riffraff rascals they have suspected to be the masterminds in committing such atrocious acts on the life of the young departed girl, Regina Sarfo, whose lifeless body has been discovered in a bush after they had slain her with a certain identifiable knife at the scenes of the sorrowful incident.

The Police Officers revealed that, after the alleged gangsters who were believed to have slain the girl, the knife in which they have used to kill the girl, was conspicuously left at the site of the heinous offense which could be an evidence against they themselves.

They have disclosed that, when they got closer to the lifeless body of Regina Sarfo, they clearly saw that, the knife which was used to slaughter her as though she were an ox, was left on the ground of the incident with some packs of sticks adjoining to her stomach beside her dead body.

Based upon a thorough and comprehensive investigations conducted into unraveling those who undertook such a ghastly act, they have been able to arrest at least, three hardened criminally intent people who are believed to have hands in the murder of the girl, Regina Sarfo at Konongo after dumping her dead body in a bush.