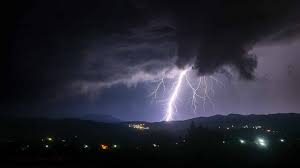 It was a horrific scene with lamentations and groaning yesterday when a known coconut seller in the Ho Bankoe area was stricken by the lightning of thunder during a light rainfall in the community.

It was a tragedy beholding the sight of such unusual scenes yesterday when the thunder flashed its severe and scary light on the coconut seller. The thunder struck three of the children but unfortunately, one of them passed away instantly leaving the other two teens in a state of shock and trauma.

But the coconut seller, a seventeen years old boy, was among three other people who were smote after that disastrous act from the lightning of the thunder and terrifying flashing lights.

Unfortunately for the coconut seller, he lost his life while the other remaining two teenagers had been sent away afterwards to receive some traditional medical attention from those in the town who may have a different understanding of the occasion which might have led to the striking of such vulnerable children.

Some people have attributed the striking from the thunder to the spiritual aspect saying it could be some kind of a suspected case they may have fallen in or either they were aware of a certain unfortunate incident which they were not willing to own up hence the decision of the thunder to strike them.

In the case of the spiritual aspect, certain parts of the Volta Region practise and believe in situations where an item has been stolen or misappropriated without accounting for it, they will make a public announcement so that those who may be implicated in the alleged materials, would be given some grace period to come up and confess but apart from knowing or having a knowing of such an issue without telling the truth as to what you know about it, will amount to you being a liar and you are likely to be mentioned to the god of thunder where you can be stricken in the open the moment the weather becomes cloudy.

It is as a result of this scenario that many people who hail from the southern parts of the Volta Region do not engage in criminality either in a public office or in a private office. It has really made fair and transparent ways of living a righteous life in such communities.