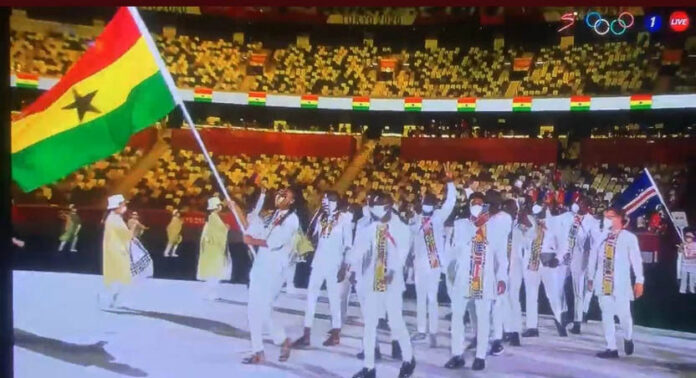 Ghana’s contingent at the 2020 Olympic Games in Tokyo made a very colourful appearance at the opening ceremony on Friday.

Led by the highly-rated Nadia Eke, who was the country’s flagbearer, the team made its way to the Olympic Stadium in grand style.

Over the years, the opening ceremony of the Olympics has become a platform to showcase both traditional and exotic fashion.

Team Ghana did not disappoint at all and, just like in 2016, appeared at the opening ceremony with all the ‘drip and sauce’.

The entire team wore dresses in the form of caftans, weaved with a Kente cloth that runs through the centre.

Nadia Eke will represent Ghana in the women’s triple jump competition, while Sansei Kwadjo Anani will compete in Judo.

In swimming, Abeiku Jackson and Unilez Takyi will compete in the 100m butterfly and 50m freestyle, respectively.

Watch the video of Ghana colourful opening ceremony appearance below: