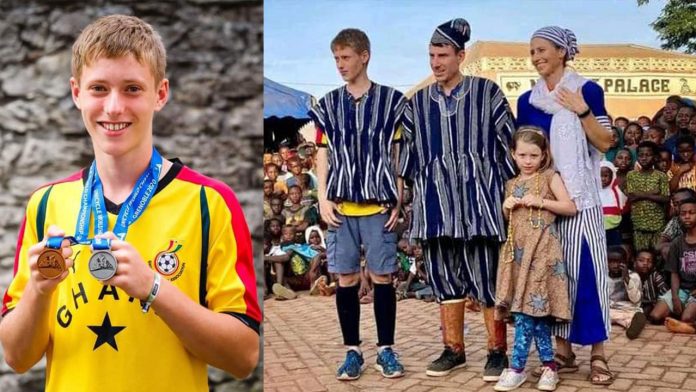 The US born Ghanaian Trey Whaun has been given a grand durbar to celebrate his dexterity and elegant attractions and exploits at the just ended World Unicycling Championship in France.

The Mamprigu based unicyclist won two medals at the Unicycling Championship in France earlier this very month which caused for his celebration and jubilation in his hometown upper north.

He and his family have been living in the North East parts of Ghana since they returned from the white man land about eight years ago where many parts of their life undertakings have been dedicated to humanities in their community. Earlier in the cause of this month, Sports Brief reported that Trey Whaun, Ghanaian teen has bagged two medals at the just ended World Unicycling Championship in France.

According to Trey Whaun, they have devoted their last eight years since they returned to Mamprigu community, serving the entire cause of humanity as a way of demonstrating the agape love of God to supply and support human needs to show and exhibit the sacrificial love God bestowed upon the people of this earth most especially those up north serving and assisting people living in the community with their pressing needs as a way of putting smiles on their faces where it would be possible that they forget of their tears in a tangible justification. The outpouring of love from Nalerigu, Mamprugu, and all of Ghana has touched our hearts and will continue to remain forever, he stated.

He further expressed his heartfelt gratitude to Na Yiri, Mba Tarana, Deema Naaba, Naakyinnaba and all those who supported his whole Unicycling Championship dreams and aspirations most especially, Ma Naaba, Gbangkugrana, Mamprigu Saha and the entire cause of the Ghanaian populace in their diverse ways seeing his dreams come through successfully.

Based on all the earlier indicated reports about his exploits during the world Unicycling Championship in France, the chiefs and people of his hometown decided to organise a durbar in an honour of him for his tremendous skills exhibited at the stage of the world whilst indicating where he hails from.