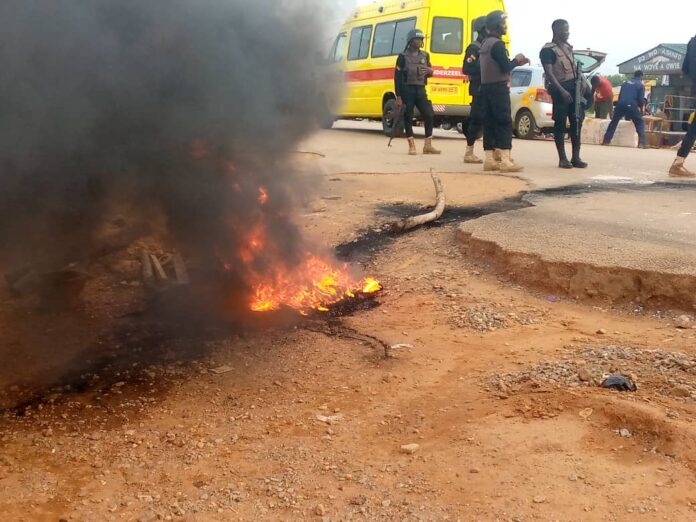 According to the Central Regional Police PRO DSP Irene Oppong, the land dispute has been pending for about fifteen years.

DSP Oppong said the Judge ruled in favor of the defendant who happens to be the Omanhene of Morkwa traditional area but the plaintiff who is the chief of Twifo Tufoe was not happy with the judgment and subsequently organized his followers to demonstrate through Twifo Praso Township.

Kasapa FM’s Yaw Boagyan reports that “in the process, they burnt car tyres, chanted war songs, and smashed the windscreen of a minibus with Reg No.GX 1519 -X belonging to Twifo Traditional Council. They also marched to Twifo Mampong to attack their own Omanhene whom they claim did not show support during the dispute.”

Subsequently, reinforcement teams from Cape Coast and Assin Foso assisted the District to bring the situation under control, and patrols were intensified.”

He further narrated that police received information that someone had been attacked around Morkwa Traditional Council area and had been rushed to the Twifo Praso Government Hospital for treatment.

The police then met the victim at the dressing room of the said hospital who gave his name as Alex Sampong, aged 45, with marks of violence on his body, palms, and head which were stitched.

The victim in an interrogation told police that on May 27, at about 10:30 am, he was attacked by one Nana Bio and one other from Tufoe without any provocation in the presence of witnesses Kwame Appiah and Afia.

He added that “photographs of the victim were taken at the hospital after which he was issued with police medical report forms to be endorsed by the medical officer for necessary action.”

“Later, one of the assailants by the name of Felix Amoamah Antwi was arrested and detained. Efforts are underway to arrest Nana Bio, ” he noted.

According to the police, they will conduct thorough investigations into the matter and arrest people behind the violence including the Chiefs and his followers.