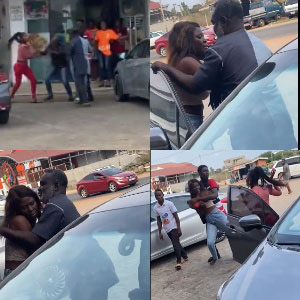 Social media bas been buzzing after two women were captured fighting over a certain sugar daddy in the presence of a crowed, including the man whi is rumoured to be their alleged sugar daddy.

The said incident is reported to have occurred at East Legon. Two side chicks fight over the sugar daddy at a ver popular snack shop at East Legon. Officially, sugar daddies are of high demand in Accra where even the old men know that they are married to their wives but they go behind the wall to have an intimacy with other ladies they think to be having fresh blood so as to energize their bodies to be in shape and in form.

in the video that has since gone viral, a lady dressed in a crop top and a pair of jeans
(side chick one) approached a couple seated before the known snack shop. Before detecting her next move, the two women were captured exchanging blows and fighting
over the older man who was also captured earlier seated with the other lady (alleged side chick 2) before the lady in crop top and jeans approached them.

The two women were separated by bystanders. The sugar daddy; after noticing the attention that was, being drawn to them by side side chick one, beckoned his date to enter the car so they could leave but was stopped by side chick one who approached them earlier and the fight started.