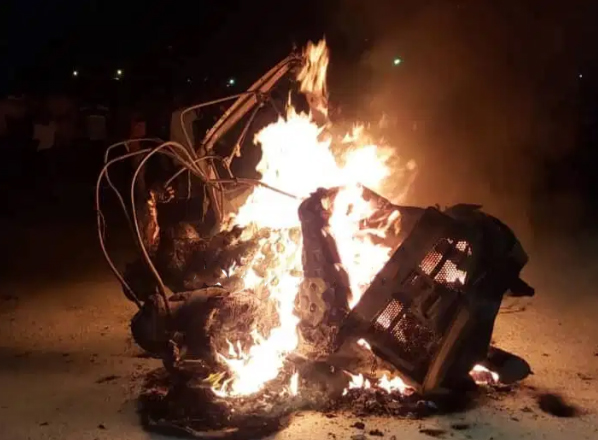 Two suspected armed robbers were on Saturday burnt to death by an angry mob at Nyariga, a suburb of the Bolgatanga Municipality in the Upper East Region.

They were said to have attempted to snatch a motorbike from a man.

By the time some good Samaritans went to the aid of the suspects, it was too late for them as they suffered severely from the burns they sustained and died in the process.

They were identified as Yahaya Lawrence, an ex-convict and Awudu Abdul Hakeem a.k.a. Hack.

The Public Affairs Officer of the Upper East Regional Police Command, Assistant Superintendent of Police(ASP), Mr David Fianko-Okyere, told Graphic Online’s Vincent Amenuveve in Bolgatanga that the partially burnt bodies of the suspects have been deposited at the Regional Hospital morgue at Bolgatanga.

ASP Fianko-Okyere said on April 17, 2021 ,at about 3:30 pm, the police in Bolgatanga received a distress call to the effect that two suspected armed men attempted to snatch a motorbike from a man.

That incident angered some people who witnessed it and subsequently set the suspects ablaze.

But by the time some passersby and onlookers got to the scene and rescued the robbers from suffering further burns, it was too late as they died in the process.

The Regional Special Weapons and Tactics (SWAT) Unit swiftly proceeded to the crime scene and saw the partially burnt bodies of the suspects.

According to ASP Fianko-Okyere, investigations showed that the two were “notorious criminals who have been terrorising residents of the area”.

He explained that one of the suspects, Hakeem was recently granted bail by the Bolgatanga District Court for allegedly possessing ammunition without authority.

He further explained that the police were making further investigations to retrieve the weapons the deceased were allegedly wielding during the incident.
Source: Graphic