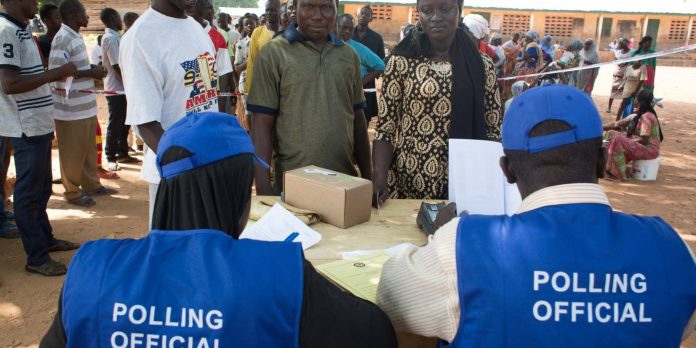 The Electoral Commission of Ghana has announced its readiness and preparedness to use the Ghana cards as a means for the eligible voters in the upcoming general elections in Ghana despite the fierce resistance and vehement opposition to it by the main opposition political party the National Democratic Congress and others who think and hold the view that, it is going to be a recipe for disaster because it is likely to cause massive disenfranchisement to many people who do not have the Ghana cards at their disposable.

According to the Electoral Commission, those of them at the leadership level whilst running the affairs of the Commission have decided to use the Ghana cards as a means of preventing unqualified applicants and non-Ghanaian voters from being part of this civil rights and responsibilities of the people of Ghana enshrined in our constitution.

If the Electoral Commission is allowed to follow the tangent that they are bent on taking, it is going to be deadly and chaotic for the people of Ghana and the rest of the world to witness because there is a large number of people who are qualified and eligible to vote but they are not having the Ghana cards at their disposable due to the numerous infractions and hitches caused by some faulty machines used during the registration and its subsequent delivery and issuance of the cards after such unattainable and unrealistic expectations that they gave from the onset that they were going to undertake free and cumbersome less program in Registering people who are qualified to have access to the Ghana cards.

Ghanaian people are already kicking strongly against the decision of the Electoral Commission in using the Ghana cards because it is not going to give them the chance to exercise their Sovereign right in voting for the political leaders of their choice because that is the only requisite standard for everyone who wants to partake in the voting process when the commission opens its voting centers on that fateful day.

The main opposition political parties in Ghana are not in tandem with the ongoing provoking being caused by the Electoral Commission because they are of the view that, everything of that sort will only go in favor of the governing New Patriotic Party which is the main reason why it is tight-lipped on the matter but leaves the rest of the work for the opposition political fronts to be doing.

It is a core fact that the Electoral Commission is very much aware of the challenges encountered by Ghanaians when they attempted to collect their cards after some of them had the opportunity to register but due to some circumstances beyond their control, they could not receive their cards even though they went to the officers and offices of the National Identification Authority but they were only met with flimsy excuses as to why such materials were not available at the time of their presence in those offices and based on the hitches and difficulties borne by such individual members they have given up on their chasing of the cards because they believe that it is not the panacea to taking them to Heaven which is their main dream of reaching after their death and there is no way they are going to allow the challenges of acquiring a mere Ghana card, to cause them of their lives and properties.

During the registration of the cards, secret clandestine agenda had been used as instructions to officers not to easily register certain individuals who are noted to be coming from certain parts of Ghana due to their erroneous impressions that such individuals are not Ghanaians enough to be voters in Ghana due to their geographic location and ethnicities but in some instances, they were fiercely resisted vehemently and some even fell sick because they were spiritually attacked as they attempted countlessly preventing them from registering for the Ghana cards.