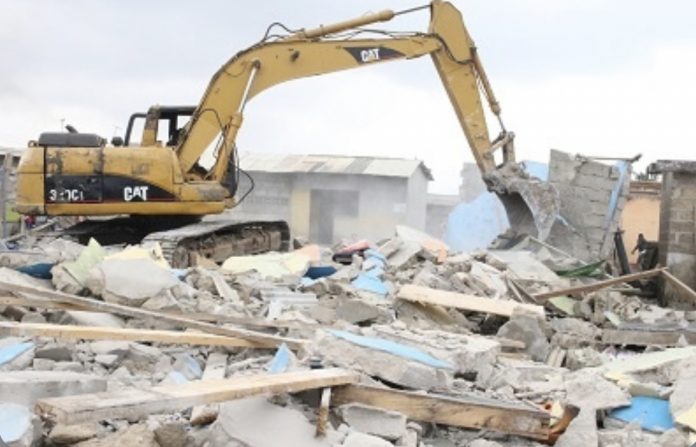 The Weija-Gbawe Municipal Assembly is currently embarking on the demolition of structures built on waterways in the community to pave way for easy access to the flow of water as the weather continues to pour in more rains than expected.

Many structures were pulled down yesterday amidst weeping and lamenting from the owners of buildings that were witnessing their properties being raised down without mercy.

The assembly earlier announced her planned demolition exercise before coming out to carry out the activities lined up to bring lasting solutions to the perennial flooding-related issues which are causing the loss of many lives in the area.

Some community members who could not hold their tears yesterday broke down crying as though they were babies but because of how everything they owned had been reduced to rabbles and ruins, they could not be able to compose themselves.

It was a sad moment in some instances where others fainted the moment they chanced upon seeing the demolition task force members with the backing up of police officers to forestall any possible reprisal attacks or resistance from the area dwellers who may resist or vehemently oppose the demolition exercises as earlier proclaimed by the assembly in preparations towards the pulling down of structures.

The issue of compensating the victims and other affected people was raised but the assembly remained motionless and unperturbed about the matter as it became a bone of contention between the property owners and the assembly task force members who are the ones undertaking the demolition exercises with full support from the municipal authorities.

The president of the Republic of Ghana announced previously that he had given the green light for the destruction of buildings constructed on waterways to help prevent the massive floods that the country witnesses whenever a little drop of rain falls on the lands of Ghana most especially in the national capital, Accra.

Countless houses have been erected on waterways without proper planning which is impeding and obstructing the flow of water after every rainfall.

As the government gave the order that such structures built on waterways should be pulled down, some miscreants have taken it upon themselves to be going around in places where they know that there is a low level of educated people in the community, they try to write funny inscriptions on the structures of the owners just to extort money from the ignorant members of the area assuming that they do not know anything regarding the law and thus they would pay what they may be requested from them for fear of seeing their buildings destroyed down the drain.

Such people would write on the structures owned by community dwellers that; warning; “remove by the assembly” and in some instances, they would write their telephone numbers in addition so that when or if you call, they would sort you out as if the assembly has permitted them to undertake such criminal activities in the vicinity.